Sometimes, I come up against something that is a new experience in cat-care. Yesterday, I had to buy a bag of cat-litter. The brand I usually purchase is World’s Best Cat Litter, which, I believe, is derived from corn; I usually buy the variety that comes in a red bag. It is, supposedly, for multiple-cat households, though why the litter in that would differ from that meant for single-cat households (which comes in the green bag), I don’t know. In any case, I habitually buy the red. 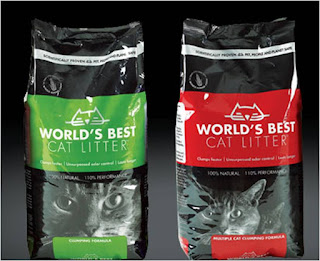 Trying to save money, I purchase the largest bag the pet-supply shops have. Yesterday, however, they had only the medium and small bags. I decided to buy instead a large bag of the green variety. At one time, I had used the green variety, so I saw no harm in it. It was needed immediately, so when I returned home I poured some into a couple of litter-boxes, mixing it with the red variety already there.

Hector was the first to visit the green-bag litter. He started eating it. I put a stop to that quickly enough, though I was disturbed that he would do that, and puzzled as to how I would keep the new boy from eating the new litter. Soon after, Renn needed to use the litter-boxes. He too started eating the contents. It wasn’t, then, just a matter of the voracious Hector wanting to eat anything organic. There was something in the new litter, or its processing, that made it smell like food.

I threw out the litter that I had poured into the boxes, though I will try to give away - with an appropriate warning - the considerable, unused portion of the green-bag litter, which is considerable. I hurried to the pet-supply shop, which was about to close, and bought a medium-sized bag of our regular litter; it was the largest bag available. This proved a success, and the beasts used it in the evening and night for its intended purpose.

As I had written above, I had used the green-bag variety of World’s Best Litter at some point in the past but switched to the red; I don’t know why, though it certainly wasn’t because the cats were eating it. The formula or the method of production must have changed in the interval. I know there are some brands of cat-litter that animals will find appetising, but I have not had to deal with that problem myself, until now.

It is yet another element of cat-health in which we must be vigilant. That’s good, because I think I was running out of dangers to guard the beasts against. 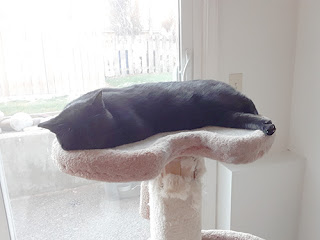