Not So Lonely Are the Brave

I am quite pleased at how Hector has progressed during his time at the Cosy Apartment. When he first arrived, he was very shy of people. Though he quickly grew accustomed to me – since he and I were together every day; I played with him, fed him and petted him – he was reticent around other humans.

That has changed considerably. I noticed recently that he had few qualms over coming out to greet others in the rescue-group who came to drop items off or pick them up. But today, a stranger came by to collect some things, and my dark knight walked out of the bedroom and right up to her, rubbing against her and receiving pets. He retreated somewhat with sudden movements or noises, but he didn’t run and hide.

This is, of course, significant in terms of his potential adoption. Most people understand that cats in a new setting or with new people, or both, require time to adjust, but if Hector consents to associate with unknown humans right away, this will aid in his transition immensely, and it’s simply good for his morale.

Hec hasn’t had much interest yet, but when his time comes, I think it will find him ready. 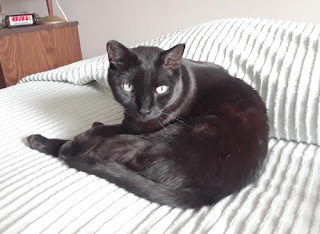