While I Was Away

None of this happened while I was away but, rather, while I was selfishly pre-occupied with my own tiny, insulated world of surgeries. How I could have been thinking of something other than cats, my beasts surely have no idea.

Renn was ill last week. At the beginning of the week, he started throwing up, unable to keep anything down and with very little appetite. This has been a recurrence with my big boy for a while. I suspect there is something wrong with him but have not been able to find it through blood or urine tests, and it is not consistent. But for its latest manifestation, he could have chosen a less inconvenient time.

Fortunately, I have a good supply of Cerenia pills left over from Tucker’s last sickness. They did help him keep things down, and so I gave Renn a dose on both Wednesday and Thursday. I had visions of trying to force-feed him immediately after my operation, which probably would have been bad for both of us, but by Thursday evening he was better, and has eaten well since then, keeping everything down. His appetite has returned and, despite my earlier opinion, I think the Mirtazapine has offered some prompting to his hunger. He has two kinds of hard-food that he eats, and he also enjoys some Recovery soft-food now and then. I like that, as the more choices that are available, the less likely he is to reject all.

Now, however, he has a bad cold, with sneezing and snot, but it’s not keeping him from eating, and that of course is my main concern. I can’t see that it is connected with his prior upset. 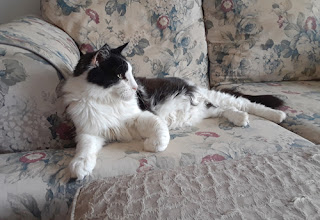 Also food-related is Minuet’s latest development. When she came to stay with me, she arrived eating Fancy Feast and a ‘dietetic’ hard-food. (Originally, it was called ‘diabetic’, but a suitably important government department complained that it doesn’t actually help diabetes, so the name was changed.) She soon started throwing up her food, so I took her off Fancy Feast and put her on to a seniors’ variety. The vomiting, never constant but just every few days, continued, so I decided it might be the hard-food. This I recently removed from her menu, and the upchucking stopped.

In the last few days, Min inadvertently ate some of the ‘dietetic’ food and I heard her puking in the night, two nights running. (Interestingly, and annoyingly, I could never find her debris in the mornings, so it may have been a dry-heave type of rejection.) This seems to confirm my concerns over the hard-food with which she arrived at the Cosy Apartment, though why she would have these symptoms after being on the food for a year, I don’t know. (It’s possible that she was going through the motions of being sick all that time but, without physical evidence, her former owner never thought it was occurring.)

Now, however, Madame has started to go off her seniors’ variety of soft-food. I think this is nothing more than boredom it. Fortunately, she enjoys Recovery, so I am mixing it with the seniors’ food, and this appears to satisfy her. She also likes the Orijen hard-food, which is the general hard-food left out for the other beasts. If she does not puke over the next week or two, I will think that my hypothesis regarding the ‘diatetic’ food was more or else correct.

Recovery, aside from being very expensive, might be rather too rich for a very-oldster like Minuet; Orijen, too, might not be the best for someone her age. But her age is nineteen years; she surely doesn’t have much more time left on Earth (though I will be very pleased if she does) and if her current fare is enjoyable to her, why should she not indulge herself? It can be tough coaxing a senior cat to eat enough to keep her going; if Minuet looks forward to her meals, if they give her pleasure, rather than being a boring part of a bland day, why should she not eat well?

I have found the convoluted agonies of attempting to feed a cat correctly – or at least satisfactorily – to be the most difficult part of caring for these beasts. The complicated plotting of a cat’s menu over the years must resemble a chart of the secret diplomatic negotiations of the most devious Renaissance princes, or the collected scripts of a decade of television soap operas. But if Minuet or Renn or any other animal in my household walks away from an empty bowl purring then all the fantastical plotting will be worth it.

(A couple of readers expressed surprise that Minuet was not wearing her shirt in yesterday’s picture of her. She wears it during the cooler parts of the day – the night and the twilight times on either end of night – while I remove it during the warmer hours, such as when I am at work. That’s when I see her grooming herself, an action I believe is as morally beneficial for a cat as physically. Her nakedness is then compensated by a higher temperature in her room.) 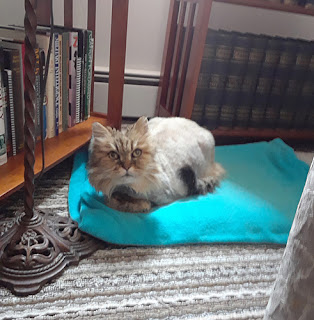