This happened a few minutes ago. I was lying on my bed when Minuet came into the bedroom and jumped up onto the bed. There was no warning, no preamble to her action. She of course yelled at Renn and Neville but I managed to get both of them to stay. She continued to shout at them, but also spent time cleaning herself, before getting down. 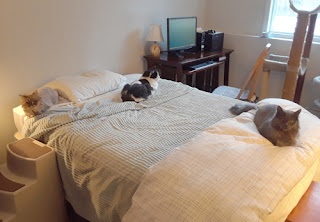 I had noticed that she had wanted to come up onto the bed priorly, and I had been urging her to use the stairs, but she was reluctant. 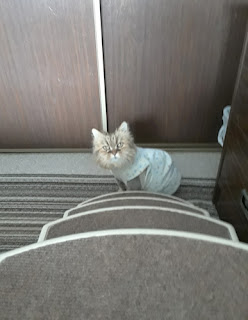 Instead, this evening, she jumped up. Does that not hurt her old joints? Maybe, maybe not – but she just did it again. I had led her down the stairs when I perceived that she wanted down, but between first starting this entry and now, she has returned, jumping up once again. There is some issue over Nev’s presence, but the Nevsky isn’t leaving. The more the other cats stay, the more Min will become accustomed to them. That’s the theory, anyway.

This is a big step forward for Madame’s integration, not just with the other cats, but with the other rooms in the apartment. But if she does this at night, how will I guarantee not to knock her off in my sleep or, possibly as bad, have her leap the distance to the floor? 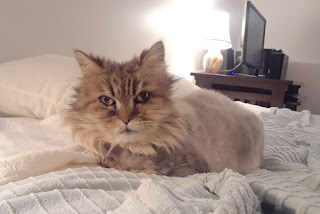