Minuet said ‘good morning’ to me with her usual loud greetings, which have been rather subdued for the last few days. This in itself was a pleasant sign. Even better was the sight of her abscess, or lack of one; it has diminished considerably. This doesn’t mean that there is no tooth damage or that something internal didn’t caused the infection, since the anti-biotic is just dealing with the infection, not what may have prompted it. But I am confident that it is an external abscess, as it leaked considerably  from being inadvertently opened, probably due to Min’s scratching; there doesn’t seem to be any more puss to come out. There is an ugly scab there, and her hair is stiff, but both of those will get better with washing and grooming. She is scheduled for another doctor’s appointment next Tuesday. A more efficient examination will be conducted then than was available this week, the swelling having prevented a close look.

For now, I am optimistic that whatever her injury was, and whatever resulted from it, is on its unlamented way out. 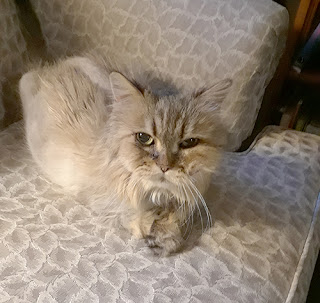