Minuet is doing well. I think the abscess is gone, though it has left behind an ugly scab. That will disintegrate, with some grooming on her part and mine. I have some anti-biotic remaining, and will use it up, though the doctor said that five days’ worth would be sufficient. I tend to keep the treatment going for a little longer than prescribed, simply to make sure of the effort. I will watch the results.

I have decided to cancel Min’s follow-up appointment on Tuesday. I don’t think it is worth the stress to her (and the cost, which must always be considered, unfortunately). I don’t believe hers is a dental matter. The abscess was on the outside of her face; it burst and leaked puss and blood externally. I’m sure I would have seen them in her water, her food and drooling from her mouth, if it were an internal wound.

Her behaviour suggests that she is recovered. She is eating well and talking as usual. As well, it has been three days since she wet outside the litter-boxes. She had left one or two puddles outside the boxes each day for a few days, six to twelve inches from the boxes. I am certain those incidents were caused by the discomfort of the abscess; the fact that she is no longer doing this indicates relief from pain. I was ready to buy some more Cat-Attract litter, though I wonder now if that would have helped, the reason for her mis-aim being stress from a physical injury. (She now and then wets enough outside the box for the urine to travel underneath it; that is a different matter, simply not being far enough in the box. At her age, that she is able at all to get into a box – even one with a very low entrance – is commendable.)

I will keep her under observation, checking the remains of her wound for renewed swelling or puss. A second trip to the hospital is not out of the question, but is on hold for now. Madame is feeling good. 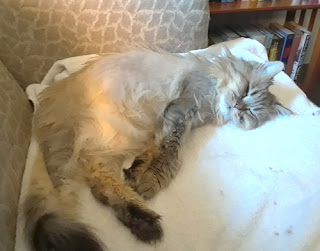