Minuet is a very sensitive lady. Following her abscess and a trip to the veterinary hospital, she started wetting outside the litter-boxes again. I’m pretty sure that this was caused by the upset in her routine, and especially by the doctor’s appointment. Once again, I have bought Cat-attract litter, the heavy clay litter that does just what its name states.

At first, I thought it was failing me. The first day that I put it in the library’s boxes, Min continued to wet outside. She had selected as her spot the entrance-way to the library, where the jamb and the door itself create odd angles, corners and obstructions. The plastic that I put down on the floor of the library therefore covered the carpeting there incompletely. This was, naturally, where Minuet chose to wet. The results were as one might expect… I replaced the plastic there with soaker-pads, and she wet on four of them the very evening I put Cat-attract in the litter-boxes.

However, later that night, Min used a litter-box. Then she used it again. That was going on two days ago, and so far, she has continued to go where she should. I watched her one time: she walked to the threshold of the library, stopped on the soaker-pads, turned, hesitated for a couple of seconds, and then climbed into the litter-box. (Soaker-pads are a mixed blessing, since they retain the smell of cat-urine, to some degree, even after repeated washings. They were probably calling her as was the litter-box, though, fortunately, to a lesser extent.)

Madame is a creature of habit, perhaps more so than most cats. She is also sensitive to a high degree. If driven by disorder to disrupt her routine, if a disturbing unpleasantry, such as a hospital visit, throws off her balance, it takes work to bring her back to where she should be. But she wants to be there, and that helps. As problems go, this is not a major one for me; I worry more about Min. Yet, considering how well she has adapted to the greatest challenge of her life - coming to the Cosy Apartment in January - I think she is strong enough to overcome this latest difficulty. 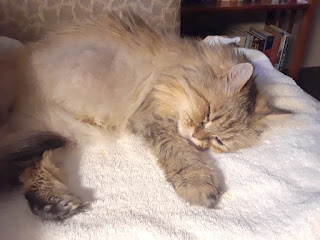