This is Sable, my outsider-cat. She has been coming to my apartment’s Café Cosy for food and water for more than four years. She used to come with her shyer sister, Sablette. They would disappear for months at a time, only to return as if they had never been away. One time, Sablette did not come back. 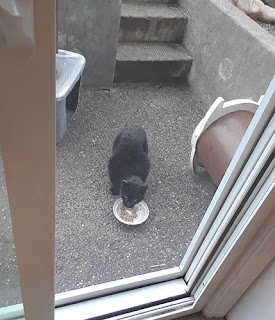 Now, Sable shows up periodically with a chonky white and orange cat I’ve named Arliss. He is very timid and may have a home somewhere, as he accompanies Sable rarely. Nonetheless, they appear to be good friends.

Sable has a distinctive right ear, with a rim of silver; possibly this is due to frostbite. Lately, I think that the silver portion has increased, though I may be quite mistaken about that, as I see Sable almost always in the dark. Observing her in the relative brightness of an early twilight may allow me to see more of what was always there. 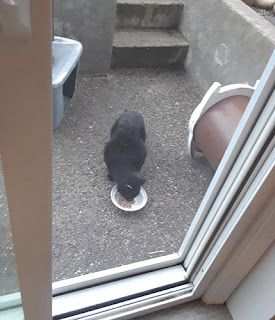 In any case, Café Cosy’s principal customer appears to be in good shape. She is not thin; I know she has other food sources, as she not infrequently takes several days’ hiatus from visiting, and is none the hungrier for it. (Even so, once in a while, she will show up famished; I can tell, and feed her extra then. This will happen, for instance, after several days of rain or strong wind, the latter which she seems to dislike greatly. She sometimes will come to my apartment first of all her sources of food, and will be hungry because of it.) Here, though, she has clean water and soft-food, though I’ve had to restrict her menu to two tins of Fancy Feast or the equivalent at each serving, due to the sharp increase in the price of everything in the world. She does, however, have an unlimited amount of hard-food at her disposal, and that, unlike the soft-food, which is given only when I see her, is available all the time. 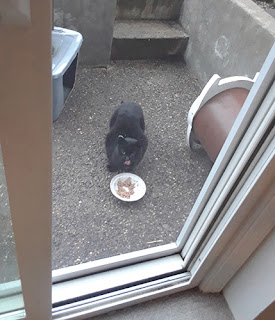 I have debated trapping her and trying to make a house-cat of her, if ever I move from the Cosy Apartment. I would worry greatly about her if I left her behind. On the other hand, she clearly has at least one other benefactor, so she would likely not suffer - at least no more than would any other outsider-cat - and socialising her would be quite a project.

But for now, Sable remains Café Cosy’s best patron. She is polite, sharing her table with Arliss, and tolerating the mildly uncouth eating habits of a skunk, Horatia, whenever the latter comes by. One day, Sable may not visit any more. When that happens, I will be able to hope only that I made a hazardous life a little less uncertain, and was able to provide some enjoyment in a world at times too severe. 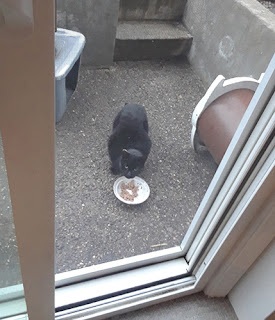