The Little Brain at Work

Hector is a smart fellow. I learned this early on in our acquaintance, but I see evidence of it all the time, usually when he is playing or attempting to get somewhere/food he should not be/have.

As an example, we were playing with a string-toy consisting of a stick, a string and a rather vague representation of a winged insect at the free end of the string. I would swing the pseudo-bug about and Hec would try to grab it. The rules are pretty simple. But the insect this time landed among other toys and was hidden from sight. I watched Hector look for it for several seconds, his green eyes darting about, his head moving. After a brief moment of indecision, he rejected the notion of searching further, and simply attacked the string. And why not? Pulling the line will bring the bug as surely as pulling the bug itself.

On the weekend, we were again playing, this time with a long, black shoe-string. Despite being even simpler than the string-toy, the shoe-string is preferred. Perhaps there is less artifice about the game. Anyway, at one point, I lay the string under a large box; I had one end beyond the near side of the box, while Hector tried to pull at the bit of string appearing from under the box at the far side. I pulled the string more and more toward me; it was disappearing under the box and, eventually, there was too little for the dark knight to seize. Thereupon, he rushed to my side of the box, where he found plenty of string to grab.

Hector observes and thinks; he considers possibilities and weighs options. There is a brain in that little furry head, and it is usually working. 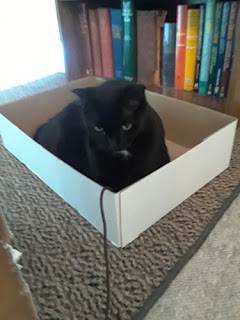 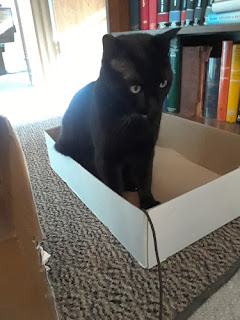 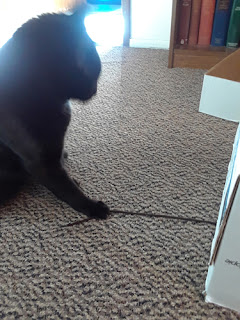 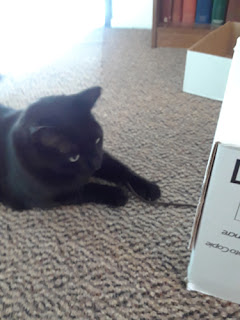 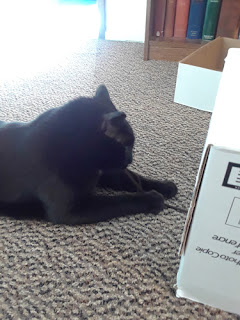 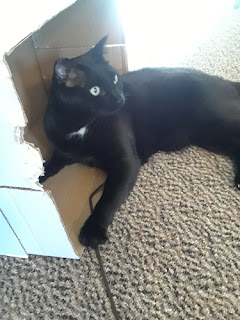 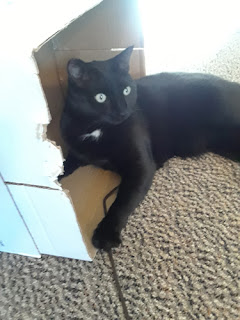