With Little to Report

It’s been almost a month since I’ve featured Renn on my blog. The interval has been taken up by Minuet’s issues – her recovery is still satisfactory – and Hector’s antics, with a couple of guest appearances by Neville.

The fact is that my big boy is doing well, with little to report, which, in the case of the latter, is probably good. Renn has off-days, when he won’t eat breakfast. That almost always means that he will throw up some time during the day, and be off his food till the morrow. This happens once every ten days or so. I’ve taken him to the doctor more than once to investigate it but nothing untoward has been found in his blood or urine, or in x-rays or physical examinations.

Irritable bowel syndrome has been hypothesized; among its symptoms are vomiting and diarrhea (Renn’s bad days usually give him watery poop). Few other symptoms coincide, however, and the management of the syndrome involves steroids and/or dietary change. I am hesitant to give Renn drugs, and he is very fussy about what he eats.

The fact is that the episodes are, in my opinion, too few and infrequent to demand remedies that may affect him more adversely. For quite a while, Renn has been enjoying two kinds of hard-food (of which he has his choice whenever he asks for them) and a small variety of soft-food; none of these are bad for him. He doesn’t like any additives, such as pro-biotics, and will refuse food that has been so diluted. I feel that his life, despite the odd bad day, is proceeding too well to tamper with. And, as he is fifteen, I don’t like the idea of messing with what is, for the most part, working. This may be a miscalculation on my part, but if he has just a few years remaining, which seems likely, I would prefer them to be mostly filled with his easily-purring attitude.

Thus, my big boy’s life is largely uneventful. At our ages – his and mine – I think we both prefer that. Our existences are prone to sudden changes, so this may all be rendered immaterial tomorrow, or next week. But for today, Renn is doing well, with little to report. 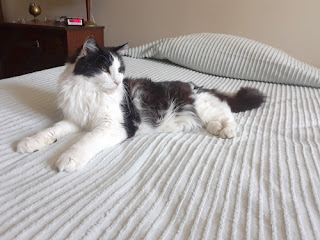 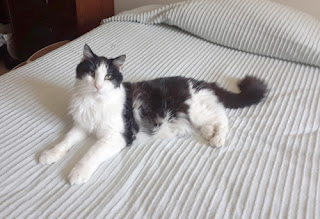