Not Even His White Tuft

I peruse the internet’s sites that feature ads for cats and dogs lost and found in my town. Sometimes I find a cat who has been found or seen who also matches a picture or a description of one who has been lost; I alert the searching owner to this. I am rarely alone in doing this, as other animal-lovers are doing the same thing. I have been able to return two missing cats to their owners after I saw them coming, separately, to my outside food-bowl, and then matched them to images in ads on the internet.

But many cats are not found. I especially dislike seeing notices for missing all-black cats. These are very difficult to differentiate from one another. A domestic short-haired black cat looks very much like another of its sort. There is often a white tuft on his chest or throat; too many have it for it to be a distinguishing mark. My foster-cat, Hector, is an example. It is impossible, seeing a black cat outside, to determine if he is one who is missing, unless he wears a distinctive collar, or has some other, often unnatural mark, such as a scar or tipped ear.

All-grey cats provide a similar predicament, as do brown-and-black tabbies, though the latter frequently have a pattern that is unique. Even so, capturing a cat just to hold it for the owners to come and examine is impractical, as is collecting every outside cat one sees and taking it to a veterinary hospital to scan for a micro-chip.

Thus, even when one is vigilant, even if one is conscientious, retrieving a lost cat is not as simple as it may seem, regardless of how many felines one observes who might be the animal in question. And one can’t simply shelter every cat one finds outside, whether he’s known to be lost or a stray. It’s a frustrating and sad business, watching cats who may be lost or may not be – especially when one knows one is looking at a lost cat for whom so little can be done. 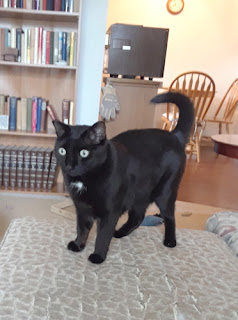