I’m sure most people who have cats have seen or heard of cats ‘chattering’ at birds they see outside, as if they are talking to animals they hope will be their prey. I’ve seen it before in some of mine, but yesterday I observed a variety of it I have not come across previously. Not surprisingly, I observed it in Hector.

Hec was chasing a fly that had found its way into the apartment. My little panther ran and leaped and grabbed but couldn’t catch his quarry. At one point the fly landed on a window-screen, out of reach of his hunter. Hector sat and stared up at the fortunate insect, and ‘chattered’. But he didn’t make a sound.

I had not heard of ‘silent chatter’ from a cat before. Certainly, I have come across silent meows. Tucker used to give me those all the time, and I loved seeing the almost reticent little expression. But any ‘chatter’ had always come with high-pitched, staccato sounds.

I have read that such an action by cats is an instinctive preparation for eating or perhaps killing a live and struggling prey, loosening the jaws, like a singer’s exercises before a performance. If that is the case, accompanying sound is probably incidental, rather than purposeful. Whatever the reason, it was hardly unexpected that Hector would devise his own method. 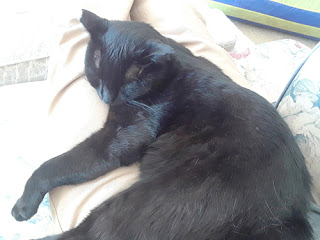