One of the interesting things I’ve noticed about Noah’s place in the household is that his relationship with Cammie is changing. Originally, he would follow the princess and, in so doing, annoy her tremendously. He still does that periodically, but now, Cammie just as often shadows the boy. Noah has decided that being followed by a ferocious Siamese cat isn’t as much fun as he may have thought it would be. I will find him sometimes cornered, squatting somewhere with his exit blocked by Cammie, similarly squatting, neither animal doing anything, just waiting for the other to make a move.

On the other hand, Noah still makes the situation worse - or at least keeps it as tense - by now and then aggravating Cammie’s already irritable nature. He will rush at her, just to stop abruptly. The princess will of course fly into a rage over this provocation, which is likely Noah’s intent. He’s a youth, now, about a year old, and likes to see what he can get away with.

The other day, I caught the two of them confronting each other from opposite ends of the nylon tunnel. Noah was threatening to zoom through it at Cammie, and the latter was ready to administer whatever punishment was necessary when it happened. Fortunately, as I was trying to relax with a book and a cup of tea at the time, nothing transpired, and this stand-off fizzled out.

Do you see Tucker looking on disinterestedly? It matters not to him who wins, so long as they leave him alone. A truly feline attitude... 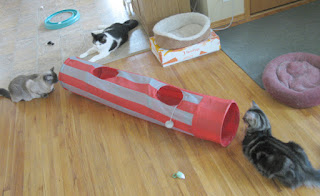