He Screams for Ice Cream

More than six years ago, I wrote in this blog about Tungsten’s liking of ice cream, and how she appeared to have distracted me one time in order to lick some from my bowl. These days, it is Tucker who enjoys a taste of the dairy product.

Tucker isn’t devious; he is obvious. He has a certain cry that he emits only when he wants something that I am eating. He doesn’t make much of a sound when he is hungry in general, or when I am preparing his own food. Cat-food is not, apparently, exotic enough for comment. But when the ice cream comes out, it’s a different matter.

And it’s a different matter at the exact moment the ice cream is removed from the freezer compartment of the refrigerator. The roly poly one knows its container, and he starts crying as soon as he spies it. He is insistent.

I don’t eat ice cream often myself. I usually treat myself to it during my holidays, and I am finishing the remains of that treat. But there is always enough to leave a little pool of it in the bottom of the bowl, an amount that will hardly do a cat harm. And, if I work hard at it, I can persuade myself that Tucker is actually asking for some politely. 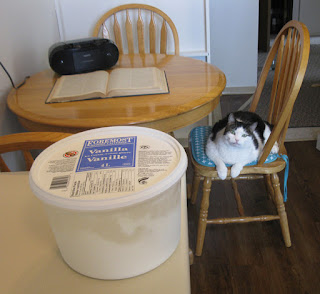