Once More Unto the Breach

Tomorrow I return to work, and my holidays are over. I must bid farewell to Idylland (of which Holidayland is but a province) and return to Workadayland.

As usual on my vacation, I was able to achieve much, completing all but one of the chores on my list. That was, in fact, one of three I had added after I had begun my holidays, so strictly writing, I finished everything on the list, and then some. The final chore I will complete on the next long weekend.

I worked once more on the PAW Society calendar, most of which is done. I also cleaned all the cat-trees, and am quite pleased with the results. You could now eat off those trees if you wanted; I certainly won’t, but you can. I washed the storeroom where the litter-boxes are kept (fine litter-dust gets everywhere, and is not to be noticed except upon close examination, but walls needed to be wiped and washed anyway), cleaned blinds (I at last determined how to clean those flimsy metal wands that make up a set of Venetian blinds and which collect grime and dirt so well) and dealt with a dozen other tasks too large (or too small) to do at other times.

There were, as you may recall, some issues with the cats. Cammie is still doing well in her recovery. There have been no signs of vomiting, and she continues to eat, though the effects of the appetite-stimulator may be diminishing, as her enthusiasm for her food is doing likewise. I don’t expect it to disappear, but it was pleasant to see her suck up a heaping tablespoonful of soft-food in a few minutes and ask for more.

Raleigh too is better, though his problem seemed psychological. He still runs away from me now and then, but not always. I have been giving him eye-drops, which necessitates seizing him and holding him on my lap. But after the medicine is dispensed, Peachy doesn’t jumped off; he lies still and calm while I brush or pet him. He walks away about fifteen or twenty minutes later but is not panicky about it. This may change Tuesday, as I must take him once more to the veterinary hospital, for the effects of the eye-drops to be judged. More importantly, his mouth will be re-examined. His Prednisolone dosage was restored to a full pill; hopefully this will clear up some of the stomatitis that made a resurgence when the dosage was reduced. If not, his remaining teeth may have to come out, which will be hard on the boy.

It was a busy holiday, but an enjoyable one; any time away from work is. Since I took my vacation a month later than normal, and won’t next year, there are now only 45 weeks until my next holidays, instead of 49. Bonus! 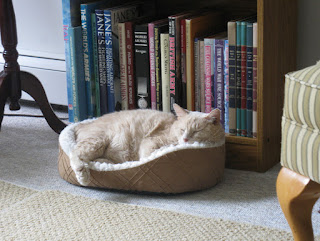