…And what happens almost every long weekend? Cammie becomes sick.

Very early this morning, the princess threw up her breakfast. I didn’t attribute it – I didn’t want to attribute it – to her usual illness, some form of severe food allergy. Her behaviour suggested that it was a momentary aversion to the particular meal she had consumed. But after she regurgitated twice more later in the morning, I realised that she would need another trip to the veterinary hospital, and an injection of Cerenia.

This she received at 2.30 this afternoon. She has been quite morose since, and refuses to eat anything. This was expected. After vomiting food, Cammie becomes distrustful of food in general. She has not eaten anything – that stayed down – since last night, so if this condition prevails by tomorrow evening, I will force-feed her something, an action to which I am not looking forward.

I am very much puzzled as to why she is having this episode. I am certain she did not get into anyone else’s food; I am vigilant in this proscription. Though she has managed it even under my eye in the past, I can’t believe she did it this time. Her blindness makes the possibility even more difficult.

The only thing I can think caused it was the Z/D soft-food that Cammie eats. It is horrible hydrolised rubber, barely edible; she has liked it for some time now, however. The likelihood, given its composition, that the Z/D created this disturbance in her is very small. But the tin I opened for her this morning seemed to be of a slightly different consistency. I had noticed one or two other tins like that on previous occasions. The fact that she ate from them and suffered no ill effects suggested that this one too would cause no problems. Perhaps it was contaminated.

For now, we wait. Cammie has not thrown up since this morning. Neither has she eaten, nor even drunk. I think she wants to, but is afraid of the consequences. I hope to see that change tonight. 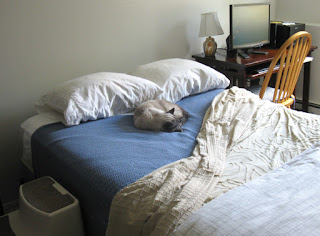