Yesterday, the Felons went to the veterinary for the first time. All was good news. The kittens received their first vaccinations, were examined, and pronounced healthy. The doctor determined that they needed no more de-worming - and they are indeed both boys.

The visit to the hospital was over quickly, and the little ones were on their way back to the apartment without delay. I spent some time with them upon returning home, and it’s interesting that their reactions reflected the divergence in their characters, as they have been developing.

Oleo stepped onto my lap and settled down, purring; Bisto trotted about the library, sometimes carrying a fuzzy mouse, as if to make sure all was as he had left it. Later, however, Bisto curled up on my lap and his brother lie down on the towel under which is a pet heating-pad. There he closed his eyes and purred loudly for about a quarter-hour. Afterward, Bisto joined him and groomed him. Though they have always been conscientious about their own cleaning, washing each other has been almost unintended, an extension of washing themselves. This time, one deliberately took the time and effort to attend to the other, who evidently liked the grooming very much.

We have had some people interested in adopting the Felons, and more than one party looks promising. More conversation will be needed, but I suspect Oleo and Bisto will have a new and permanent home soon, probably before Christmas.

(Another video showing the Felons in action is on my Facebook page now: https://www.facebook.com/betcha.hugh/) 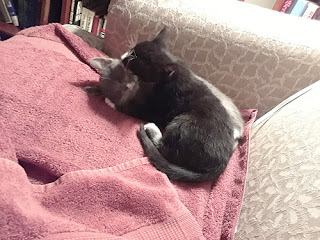 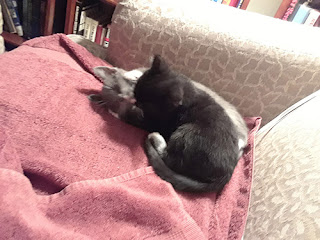 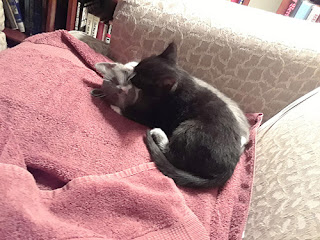