About an hour ago, this little fellow arrived at the Cosy Apartment. He was found last week lying in the middle of the road, on the highway between my city and another town. There are no communities near by, and he was probably abandoned. We rarely have space for foster-cats, but he will be staying with me until he is adopted. I’ve named him Xanadu. 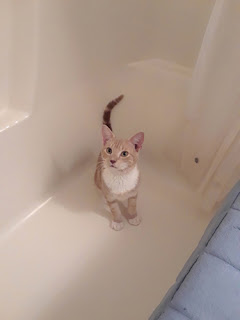 I don’t believe he was thrown from an automobile – as sometimes happens to unwanted cats – as he has no visible injuries, and acts unimpaired. He is five or six months old, in good shape, superficially, with smooth fur. He is very friendly, trusting and curious. He didn’t use a litter-box while at the home of the man who found him, but that may be for a variety of reasons. I don’t think he was an outside or barn cat, as he has the softness of an insider, and is very familiar and comfortable with human touch, suggesting daily, gentle contact. He has already sat on my lap – briefly, as there is much to explore. 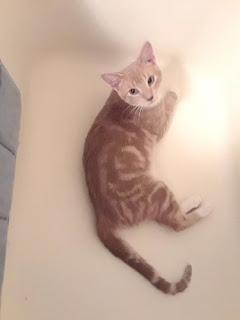 For now, he will remain in quarantine in my bathroom. That will be tough for a lone youngster - Oleo and Bisto had each other for company – but unavoidable for the time being. When he has demonstrated a knowledge of litter-boxes, he can move to the library. 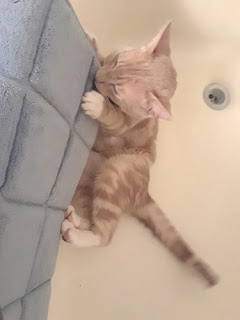 He may be a lost cat, rather than abandoned, and I will be checking the lost-and-found advertisements. If no one is missing him, Xanadu will be ready for adoption very soon. 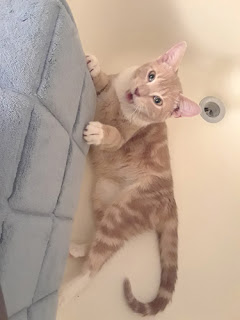