Sometimes I wish that my cats were the kind that cuddled together and groomed each other, cats who chased each other in playfulness and sat next to one another to peer out the window. But mine don’t really like each other; each could be an only-cat and be quite satisfied with the situation.

Now and then, I catch a glimpse of what it’s like in some other households. When I wake up each day, and when I come home from work, I provide a small snack for the beasts. It is nothing more than a number of kernels of the inexpensive hard-food I provide for the outsider-cats. It apparently has a more appealing taste than the costly nutrition I give mine on the inside. They eat the latter food, but the other is in the way of a treat for Tucker, Renn and Neville.

I place a small handful on the bed for each. I had been giving the Nevsky some of the floor but, unable to wait for that, he has taken to jumping up to eat with the others, lest he miss some that his roommates are receiving. So once or twice a day, there is a concerted action among the three, and in one place. There is no hissing because of propinquity, no trotting away to a more isolated corner. As I tell people introducing cats to each other, any integration which doesn’t result in murder and mayhem is a successful integration.

Once or twice a day, I see my successful integrations. 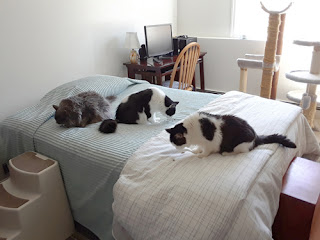 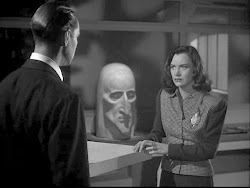