Speak Up; You're Mumbling

My foster-cat, Neville, is becoming rather a talkative fellow. He didn’t say much when he first arrived. Over time, however, he started talking to his food. He would mumble into his bowl while he was eating. He reminded me of soldiers in movies who grumbled about their food even as they ate it; there was nothing else for them to eat.

As time went on, the Former Thin Man (he must have liked his food because he ate enough to qualify his title) began talking while he was served his meals, eventually reaching the point at which he would give his low grumbling mumble when he saw the full dish advancing on him. I would hold it up - “rhnmgnrmbmng…” - put it down, then hold it up again:  “rhnmgnrmbmng…”

The Nevsky has expanded his conversation, both in its quantity and its subjects. He will see me passing and stretch out on the floor or chair - “nnghdhmgrnnghh” - and roll onto his side or back: it’s time for some petting.

And now, he doesn’t wait until I am in the same room. I was in the kitchen this weekend and heard a murmuring grumble from the higher cat-tree in the sitting room. When I looked to see what the complaint was, Nev, lying on the uppermost platform, quickly rolled onto his side. Was it time for some chin-runs? All right; I had a few minutes.

Neville took a long time to become comfortable in the Cosy Apartment. He is still rather insecure, cringing when it is time for his insulin injections, even though they can’t hurt that much. Of more worry to him is his monthly ‘curves’, day-long ear-pokings to draw blood for testing. But he has also become much more accepting of affection, and often needs me only to repeat his name to start kneading the air and purring. His increased loquaciousness is, I think, a sign of his growing comfort and ease.

I just wish he’d use a few more vowels. 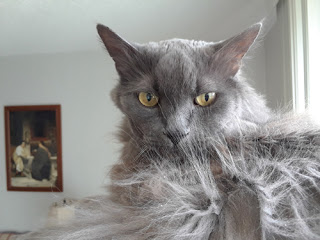