The Eyes of Mr Poly

Tucker usually isn’t one to observe the outdoors. He likes to smell the scents coming through the screens, especially in the spring, but he doesn’t spend much time seeing what can be seen, except when I hold him at the kitchen window.

But we’ve had a small grey cat coming by our outside food-bowl recently. She is, I am told, an owned cat and will be moving with her family some time this month. She is healthy-looking and friendly. When the Tuxter sees her, he is greatly interested. Other cats will stir his curiosity to a degree, but this one seems more intriguing to him than others. (You may have to click on the picture and enlarge it, to make anything out.) 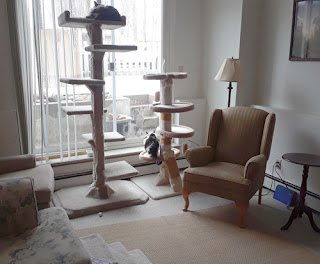 If she weren’t already someone’s, I might have brought her in. I suspect she would be willing, and would probably be adopted by someone quite soon after. She will have to be content with her current family, however, and the roly poly will have to be content with views through glass. I think, whether he knows it or not, he would probably prefer it that way.