Someone who follows this blog wanted to know how Tucker was doing. The roly poly is doing well.

His behaviour is as it should be. He is back to sitting at the dinner table with me while I eat and imploring me to give him pieces of what I have on my dish. If he doesn’t stay begging for as long as he once did, I don’t think that is a big problem. He is otherwise eating a satisfactory amount. I attribute this to the Mirtazapine. 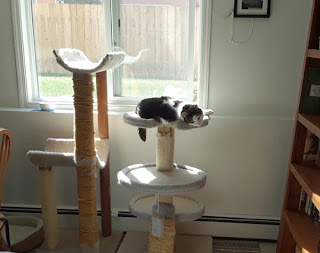 I would like to keep him on that - the doctor said that a cat may use it indefinitely – but I worry that it will lose its efficacy over time – perhaps the body grows used to it - and I would like to keep it for later use, if need be. Anyway, I want to see how his appetite is without artificial enhancement. I have one more syringe left and, under the prescription I was given, that would last ten days. I want to give the Tuxter half a dose each day, and see how that works on him.

He is also taking his kidney-powder again. Some cats seem to have had their appetite suppressed by this medicine, but so far, things are set fair for this aspect of Tucker’s treatment, too. 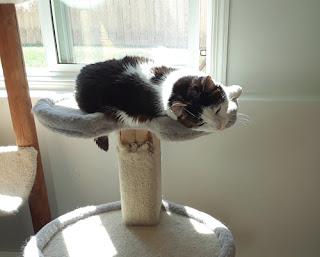 Something I have noticed is that he appears a little hesitant to jump up on to the dining room chairs, one of his favourite spots. He isn’t showing weakness in the hind quarters, which is a symptom of diabetes, so I don’t believe that is the reason. I think he is simply starting to feel his age, and feel it in joints and muscles. He is sixteen now. He has also begun coming over to me more while I am in the kitchen, and wanting attention. I often pick him up, and he purrs. I wonder if his creeping age is making him feel insecure. In any case, that is an effect I can treat without drugs. Laughter may be the best medicine, but a little cuddling comes a close second. 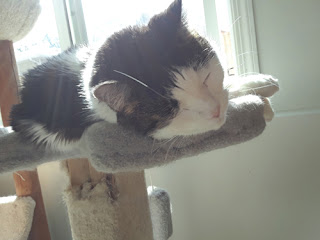