The Mystery of the Pretend Poop (a.k.a. The Case of the False Feces)

When you have pets, you never know what you will come home to find. For instance, yesterday, I came home from work, was greeted by Tucker, with Renn sitting in the background and Neville somewhere, completely apathetic to my comings and goings and, indeed, to my existence. All was as it usually is. Except what I saw on the rug of the corridor.

It was excrement, feces, poop…a turd, as Noel Coward might have said (in one of his distraught moments.) Great. Why did one of these little monsters go there, in the middle of the corridor? What’s wrong with the litter-boxes? What’s the problem now?

Then, upon closer inspection, I discovered that it was not waste product, it was by-product; to be exact, the modern meat-eater’s bane, animal by-product. It was, in fact, a hot dog. 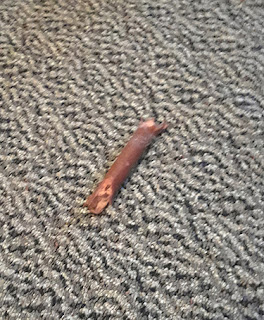 The evening before, I had opened a package of frozen hot dogs to wrap each piece of cylindrical goodness individually for consumption later. Being frozen, the little nutritionless delights required some force to separate each from his comrade. Applying rather too much force, I detonated the contents in several directions. Most, fortunately, landed somewhere clean (such as the kitchen counter), though at least one rolled on the floor. I can assure you that a hot dog, unlike, say, a book, does not need time to gather dust. This autumn-hued fugitive collected dust-bunnies like a dying millionaire collects unknown relatives. I felt bad, but that hot dog could not fulfill its destiny: rather than be eaten, it was thrown out.

I wondered at the time if I had found all the escapees. It turns out that I had not. The half-eaten hot dog disguised as its ultimate result had been reposing on the rug next to a dust-bunny that looked distinctly under-refrigeratorish.

I theorized that, having little to do all day but sleep, look out the window and discuss physics with each other, the cats were drawn by the aroma of dirty, uncooked wiener and found the missing link under a kitchen appliance. Who found it remains unknown; it could have been a collaborative effort. But the eating presented the usual suspects.

Neville is not known for exploring the apartment, nor is he enamoured of human food. Even were it coated in hairy dust, it would likely give him no desire for consumption. I can’t see the Nevsky having either the energy or curiosity required for such an achievement as salvaging a lost hot dog. 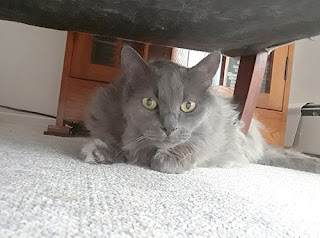 Tucker loves the taste of hot dog. I give him small bits that he consumes with relish. Figuratively, not literally. I draw the line at providing the beasts with condiments. He would also be a likely forager, digging at an unseen but smelly object until it was in his grasp. But his stubby legs are not made for delving under refrigerators, nor does his toothlessness lend itself to the tearing evident in the remains of the hot dog found. As he himself will tell a person, “he has no teef”. I ruled out the roly poly. 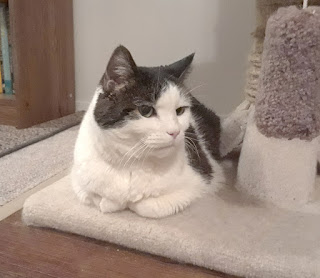 Then, there is Renn. My big boy usually disdains human food, like Neville, but has eaten roasted pork. As well, finding a large morsel under an appliance, on the floor, dirty and unappetising, might persuade him that it was not human food but just right for cats. His legs are long and lean and his teeth, though those that remain are fewer than they were, are still strong and sharp. Therefore, I accuse…Renn! 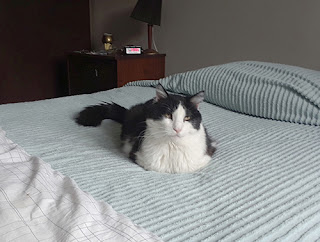 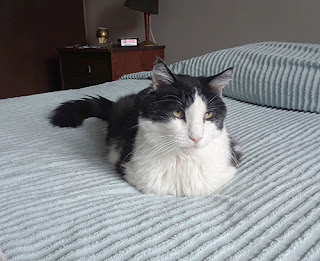 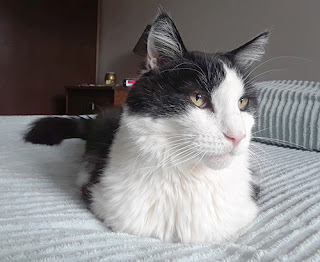 Well, I can’t be too hard on him. After all, if it hadn’t been for his diligence - or appetite - the hot dog would have mummified under the refrigerator, which would not have been good for the housekeeping. And a little well-earned snack in the afternoon is always enjoyable.

Besides, the hot dog wasn’t what I initially thought it was, and the mystery that attended its appearance was solved to the gratitude of all.