The Understanding of Silence

Tucker has a silent meow. He is certainly not the only cat to have one. It is, I believe, not at all uncommon. The small mouth opens and no sound issues, or a sound so small or high that there is little more than a slight straining noise.

I have often wondered whether cats who speak thus think that they are making sounds. Do they, perhaps, know that they are silent but nonetheless believe they are conversing? I am persuaded of the latter. Tucker will give his silent meow as an actual response to questions I ask him. He knows that I am talking to him, and he endeavours to give a reply.

The odd thing is that I not only accept it as speech, but can usually comprehend what the roly poly is trying to tell me. Would he respond thus if he lived among only cats? I doubt it. They do not communicate in such a fashion. I have read that cats in fact do not make many sounds to each other away from human society. This I cannot believe entirely, but even so, the way a cat speaks to a human is unique. It is, I think, nothing less than an attempt to approximate our own languages. 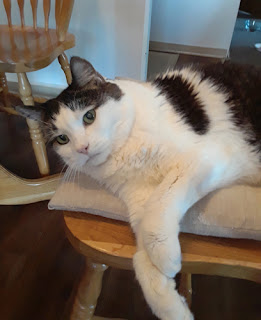 Certainly Tucker creates vocal sounds. They range from a Wookie-like trill to the loopy, roller-coaster wails of a drunk stumbling from a tavern of a Friday night. His implorations for morsels of a particularly delectable human food are used for no other purpose. Yet he has his silent meows. I speak to him, and he answers; does he understand? I think he does, to an extent. He speaks to me, and I answer; do I understand? I do, to an extent.

Through verbiage and expression, through body-language and attitude, my cats and I communicate. Usually we comprehend each other’s meanings. Sometimes, we comprehend and choose to ignore those meanings. Now and then, however, we speak to each other saying nothing. It seems that that is when we understand each other the most. 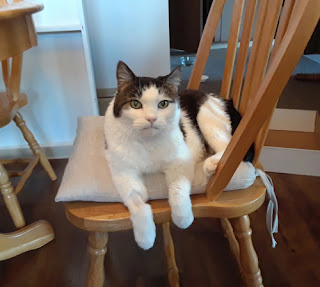