What I Miss About Her

I miss all my departed cats. But I miss them in different ways. I was thinking of Josie yesterday, and how I miss her; not the amount that I miss her - I don’t think that can be calculated - but what I miss about her. She was quite a diverse little creature. When she was young, she was playful. I isolated this one image of her from a video of a play-session she and I had from years ago; as it was in an earlier apartment, before we moved to our house (and then moved out of it), it must have been about 2009. I had tossed my Chubs the ring off a milk jug, and it landed on her face, encompassing her eye. I always chuckle at that image. 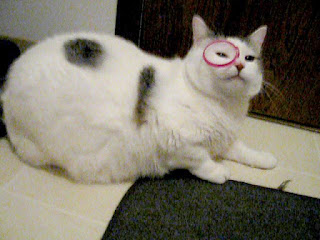 Her playfulness isn’t what  miss most about Josie. What I miss most is simply her presence. She created as much work for me as any other of my cats, especially as she grew older and sicker, but there was something mature and stable about her. She was apart from the others - physically, in that she stayed principally in the bedroom during her last couple of years - and this made her seem to be someone I could come to talk to. She didn’t engage in the shenanigans of the others, the ‘youngsters’. This felt like a difference, even though she had her own quirks that could be just as exasperating - and she was only a year older than Tucker and Cammie, anyway.

But relationships are often not just in the concrete, but in the intangible. It felt like she was a partner in managing the Cosy Apartment. It was that way with Tungsten, who really was above the rest of the crowd in terms of authority and behaviour. After Tungsten died, Josie slipped into that role - part of it, anyway - perhaps because she was the surviving one of my first two cats. Being able to spend time with the Great White felt like a conversation with a fellow adult after the children had been put to bed. 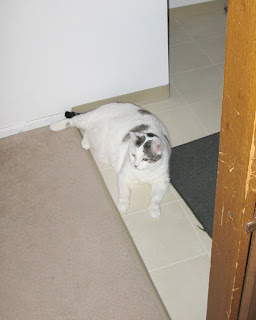