I have been letting Tucker into the building’s corridor outside my apartment, and he has been enjoying himself. He walks with his tail well up, curiously examining everything. But he is cautious, too. He keeps looking up at me, to make sure I am with him. And that started me thinking.

Tucker always looks up at my face. He doesn’t watch my feet moving beside him; he knows I am walking, keeping pace with him. He doesn’t care so much about that; he is looking at my face. He wants to see if I am paying attention to him. I usually am, because, by observing him, I can judge his mood, determine whether he is excited, scared, anxious, etc. I still must keep an eye on our surroundings, making sure I see doors open, people appear, making sure I hear voices behind doors warning me that someone may be coming out. But mostly, I am watching Tucker. I think he likes that. 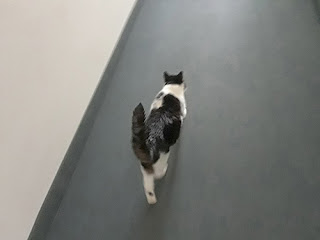 This made me think further. I see many people walking their dogs outside. Most of the humans are piddling about with their cellular telephones as they walk. The dog is trotting along, enjoying his time in what he considers nature, seeing the sights, smelling the smells. Their people seem rarely to pay attention to them. They aren’t taking their dogs for walks, they are taking their dogs with them while they play on their phones. It strikes me as worse when the case involves children, whether walking with their parents or sitting in strollers. These are prime times for learning, for being a family, and sending someone a text about what was watched on tv the previous night often appears to take precedence. 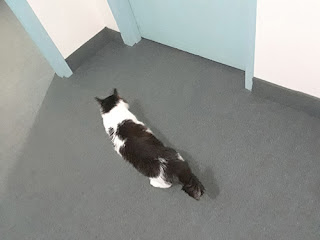 When I walked outside with Parker, I walked with Parker. I talked to him - and he talked to me - asking him what he was sniffing, telling him where I saw people coming out of their houses, commenting on the birds we heard. When he stopped at some interesting scent, I asked him what he scented. When he was tired and lie down, I might suggest a better spot, and then sat with him. 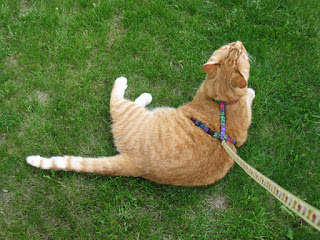 Taking into account distinctive conditions, I do the same with Tucker. I do it even more so with him, because he is more timid, and is assured more by my presence and words. My urging him on makes him feel bolder, and my warnings stop him. In between, we discuss what is going on in this tiny extension of his tiny world. When I walk with Tucker, I walk with Tucker. 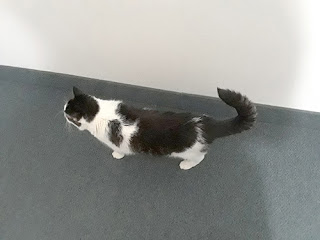