The Demon of the Litter-box

So far, things are continuing well at the Cosy Apartment. Tucker’s appetite is good, even on a reduced level of Mirtazapine; the big test will come when the supply runs out. I won’t renew it unless necessary. I of course want him to eat well without it, though even with it, he may not need much.

I was able to load up on the soft-food varieties that the beasts prefer; thanks to a couple of serendipitous sales, I twice bought a large number of tins at decent prices, and thus was able to stay within my cat-budget this month. Other sales enabled me to do the same within the much less important human-food budget. It’s the rare moment when I think of what I need to buy at the shops, and the answer is “nothing”.

However, I must disregard such insignificant matters for now and write about what is truly important: litter-box etiquette.

There are three boxes in the Cosy Apartment, two in the storeroom and one across the corridor in the library. In their use of these receptacles, the three cats here are contrasts. 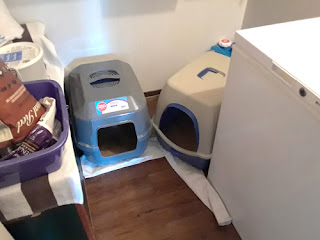 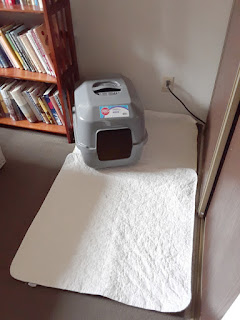 Renn is undoubtedly the least trouble. He prefers the box in the library. The litter that he kicks out during his waste management is negligible and he has never been known to miss the confines of the box. His one problem is the great and powerful stink that arises from his solid deposits. The litter I use is a good product, but even it takes about twenty minutes to overwhelm the force of my big boy’s refuse. Nonetheless, Renn is clean and conscientious, so his olfactory infractions are forgiven. 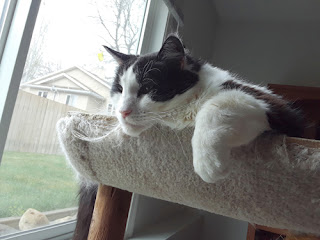 Tucker gives the odd problem. Usually he faces outward when wetting, and inward when crapping. Sometimes, I accidentally catch him in mid-use, his head protruding from the box, the rest of his sausage-shaped form lost in shadow. He always wears a look of mortification when caught at such a time, his embarrassment perhaps being great. Now and then, the Tuxter will reverse his directions and wet with his bum toward the entrance. Sometimes, this results in a small puddle outside the boxes. I place a neatly folded towel under them for the purpose of containing such spillage. It is a small difficulty and easily cleaned. 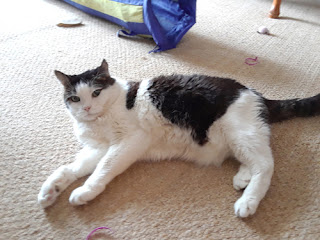 Then there is Neville. The results of the Nevsky’s wetting is without complaint. Logistically, he adds to my work, because he will often wet in one room, then cross the corridor to visit a box in another room for his pooping. He sometimes kicks up the soaker pad in the library before he leaves. 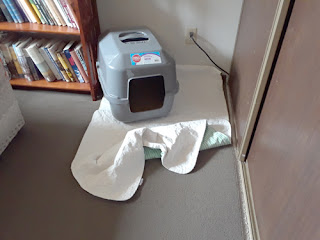 But it’s his second visit that causes some contention. His crap can create the most god-awful contamination of the air since the dawn of the Industrial Revolution. If Renn’s malodorous concoctions are like the Artful Dodger, Neville’s are Jack the Ripper. They are not just foul, they are malevolent, as if they represent the birth of some hideous demon. What’s more, in his joy to be rid of such abominations, Nev will sometimes rush from  the box without actually waiting for the logical conclusion. Sometimes I find the evidence of his monstrous actions on the floor in front of the box. I must dawn my magical armour, gather up the disgusting little enemies of light and cast them back to the nether regions whence they came. (No, not those nether regions; metaphorical nether regions.) 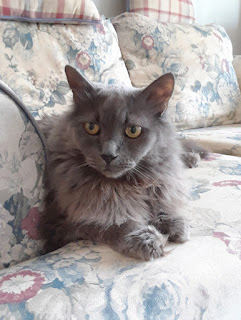 Well, when all is written and done, they aren’t too bad a lot. I have been lucky, really. Cammie used to wet just outside the box half the time. I placed a soaker pad there and little trouble ensued. Josie would wet outside as well, but that was a reflection of her once large bum sticking out the entrance, and even when she was old and weak, she would dutifully make the trip to the box to do her business. Few of my other cats of fond memory gave me problems, and never habitually.

I could use larger boxes, but space is, well, cosy, in the Cosy Apartment, and, except in the case of Tucker’s few transgressions, would probably change nothing. I have experimented with uncovered boxes but have found no difference. As everyone who has cats knows, litter-boxes are not just feline washrooms, but barometers of cat-health. I watch their habits, their products; a change in texture or quantity, irregularity or discolouration; all are part of the constant vigilance on behalf of the cats’ well-being. If I were rich enough to afford a dozen maids and several footmen, I would still scoop the beasts’ litter-boxes myself, to keep apprised of the animals’ conditions.

Besides, I doubt that there is money enough in all the world to induce anyone else to face the devil from Neville. 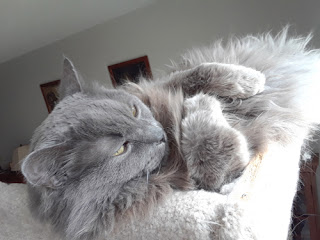