Saturday was a red-letter day for Neville and me. The Nevsky loves his chin-rubs, but I think they over-stimulate him at times, as he will swat my hand away or threaten to nip it now and then. I don’t take offence at this. It doesn’t happen often; when he has had enough, he usually just leaves.

When Nev climbs onto my lap as I sit on the couch, he will usually stay for only ten minutes or so, receiving chin- or face-rubs, and then jumping down or moving to the other end of the couch. Saturday, he remained for about half an hour.

Why that day was different than others, I don’t know. I must have rubbed him the right way, because he stayed so long my hand was starting to cramp up from so much rubbing. But I didn’t mind. He and I don’t share time as frequently or for as long as the other two beasts and I do; Nev doesn’t express the desire very much. That is changing very slowly.

Whenever I sit on the couch, I tell him to come over. Sometimes he does, sometimes he doesn’t. But he knows he is welcome. And no matter how long his moments with me last, he’ll never outstay that welcome. 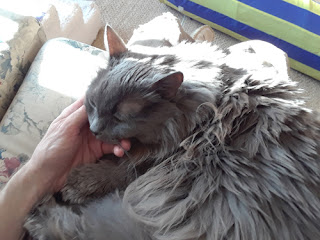