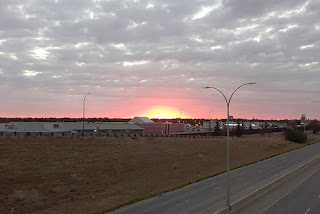 This is the sunrise from last Thursday. It was a rare cloudy day here in southern Alberta, but that’s not the point of the photograph. I took it while I was bicycling to work, which means dawn was breaking just at that moment. It seems less than a month before that the sun had been already a sixth or so of its journey across the sky by that time of day.

Every year, I experience the same phenomenon: that the days appear to shorten after the summer solstice much more swiftly than they lengthen before it. The days get lighter slower in the mornings and darker faster at night in the year’s second half than they did the opposite in the year’s first. If you know what I mean.

I won’t say that I am sorry to see the summer wane. I enjoyed its advent. The spring, with its increasing light and warmth, becomes still lighter and warmer, the nights are pleasant and balmy, their moonlight appears something from a story. But then, the trees’ leaves which are bright and fresh in May turn dull and waxy; the air heats tremendously with soaring temperatures; it sits stagnant or blows with a dirty, hot force like an Egyptian khamsin. Reinforced this year with the smoke from hundreds of horrible forest fires, the summer literally stank.

But I am being particular. This summer was regrettable in its meteorology, and I hope for better things from autumn. Even so, in general, the stunted days mean another season is ending, more months gone; all disappeared in a matter of days, it seems. Soon, I will be riding to work in the dark, and going home in the dark, too. The world has a schedule to keep that’s more rigid than any human routine, and it won’t be distracted.