Whither Do You Wander?

Each morning and early evening, the community cats outside my work-place gather for meals. There are usually six to nine of them, all of them neutered and spayed now, and familiar faces. But some whom I caught and had fixed show up no more. Then again, there are those who vanish for long periods and then re-appear.

This is Auvergne, easily recognized by his distinctive moustache. According to my blog, he was neutered at about a year of age, in September, 2018. I would see him periodically thereafter, though have not for at least a year now. But I saw him again yesterday. Though I was not able to take a picture of him (thus the photos from when he was captured), he looked good, slender but not gaunt, with a smooth coat and no noticeable injuries. 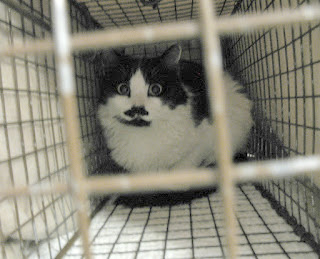 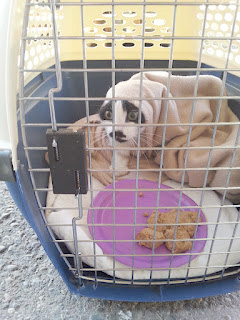 Where had he been all this time? Had he journeyed to the far end of town, found a better source of food and stayed? Was he taken in by a kind human? Did he fall in with another colony? And if any of these, why did he come back to his old stamping grounds?

Feral cats seem to do this all the time. I have not seen Sable for many months. She would come quite often to my apartment for food, though she seemed not to need it from me. She had a habit of disappearing for the summertime, so I hope that she is safe and unharmed, and will let me know come the autumn. I am more worried about Arliss. He too has been missing for a long time, and has not Sable’s history of vanishing for a time, only to come back.

I don’t have any regular outsider-cats now, except a tiny grey girl called Ninja. She, however, has a home and visits to eat my food, in addition to her own. Other cats have been seen and, I think, have stopped in for a meal at Café Cosy now and then. But for quite a while, my customers have been principally birds.