This morning, I learned that cat-dad Pete of “Tom Cat Commentary by Timmy” died on Saturday, 20th November.

I had inferred that he was battling some health issues recently, and his last blog-entry was from 26th October, so I knew something was wrong. As the time went by, and there was no new entry, I worried more and more, as did several others who followed his blog. A funeral home published his obituary:

But this obituary doesn’t write much about the man, really. I wish I could claim to have known him well, but aside from what I read on his blog and from the various comments we sent each other, I didn’t know him much at all.

However, I am aware of some things about Pete Cusack, gleaned from his blog and his comments. He was a funny and imaginative man. The personalities of his cats, elaborated in his blog, were as real to me as if they were cats I knew personally. The adventures he gave them were a delight to read, and I can only guess at the amount of time it took him to choose the right photographs to illustrate them. In many cases, he created images that were as inventive as they were fun.

Pete loved his cat-family; there are four remaining now, but there were many through the years. One of the reasons why I didn’t think, at least initially, that Pete’s last illness (whatever it was) would be fatal was that he hinted in a couple of blogs that he might be bringing in a new cat to join his household. That cat would have had a loving and happy life. I hope to learn that his cats - Rumpy, Toby, Einstein and Miss Fitz - are now in someone else’s loving care. I can’t believe that Pete, knowing that his health was not robust, wouldn’t have made provision for their happiness, if something bad were to occur to him.

Pete also loved his human family, his late parents, and his sister, who died before him. He would commemorate their lives on his blog at certain times.

Though I barely knew Pete, I feel that this is a personal loss, such vibrancy did he bring to his blog and his wonderful cats. I wish I could have thanked him for the enjoyment he brought me and, undoubtedly, others. Those who have never read his blog can find it here: http://timmytomcat.blogspot.ca

It may have been presumptuous of me to write all that I have above, knowing the man so little. But this is what I believe I did know of him, and it was all good. Godspeed, Pete, and thank you for all you did and wrote. 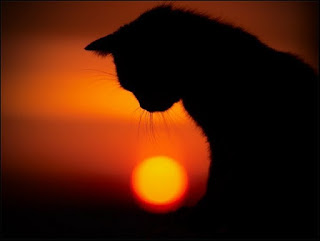