What gives a cat his unique characteristics? I wonder that a great deal, especially when I meet new cats. Hector of course has his own personality, but something that he does stands out.

Sometimes, especially as I am passing near him, if he is sitting or standing, he will reach out with a paw and try to whap me with it. It’s never a strong blow, the claws are always in, and sometimes he doesn’t even connect. The significance of the action seems to be merely that it is made, not that it has an effect. It’s a gesture, more than anything else.

Where did it come from? Why does he do it? Is it the ephemeral remains of play, learned from his former humans when he was a tiny kitten? Is it the remnant of anger at some person? Is it a defence mechanism, to prevent being stepped on? (Goodness knows, he is underfoot much of the time, so if it is a protective measure, he’s defeating his own purpose.)

He doesn’t do it every time I walk past him. He sometimes acts as if he has forgotten, then tries to make up for it. And when I forget, I think I’ve accidentally kicked him in the head walking by, only to turn and see him sitting placidly on the floor, unhurt.

This is a case in which, I believe, even the cat himself couldn’t answer for his actions, if he could talk. It’s just a habit learned long, long ago; maybe even a year ago. But it’s part of him now, a part of Hector. I rather hope it always will be. 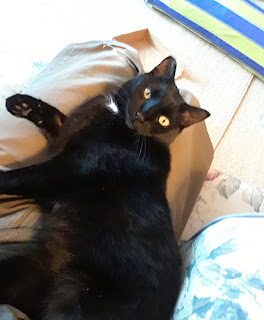