Though Sable has not re-appeared after showing up to have a meal the Monday past, another old diner at Café Cosy came by last night. Though this is an image of atrocious quality, it shows a cat whom I believe to be Arliss. 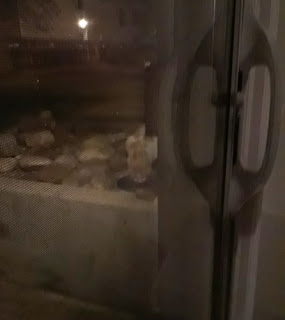 I have included two photographs from the past for comparison. I’m certain that it is the same cat. 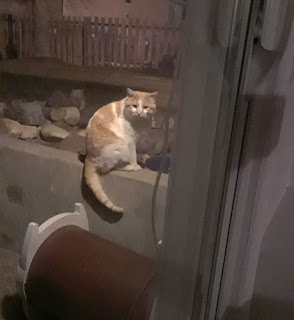 It cannot be a coincidence, in my opinion, that Arliss showed up after a prolonged absence so soon after Sable ended hers. The two would periodically visit together in days gone by, though not in any great proximity to each other. I like to think that they at least are friends, or travelling companions, someone to take the away the loneliness of an outsider-cat’s life. 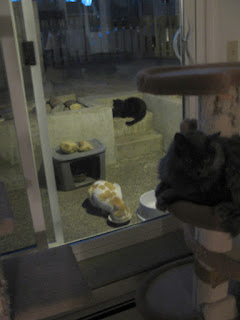 Arliss didn’t eat anything. Indeed, if Sable wasn’t with him in the past, it would be the merest chance Arliss would find the soft-food that I would leave out for somebody. Now, with no one coming by regularly, I don’t put soft-food outside. Arliss has eaten hard-food previously, but did not have any last night. He had a long drink of water from the bowl, and was on his way elsewhere when he saw me watching. This merely gave him speed. He was always much more shy than Sable.

But Arliss, like his friend, is still about, and he still looks to be well-fed. Where these two have been, what they have been doing since their last visit, I can’t guess. But there is some comfort in knowing they might have been together in the interval.