Reset on the Monday

Renn was much recovered when I returned home from work yesterday. He had not thrown up - at least there was nothing of which I could find evidence - and he wanted to eat. He consumed a decent amount of soft-food at dinner and snack-time, and, considering how he often refuses breakfast all together, a good meal to start today.

Though this all suggests a relatively minor stomach upset, I worry that my big boy has more going on inside. Nothing was found amiss on his last veterinary visit, but he is not as robust as he once was. Even so, he is behaving and eating as normal right now, and I am pleased with that.

I am pleased in general with the way things are going in the Cosy Apartment. Tolerance of each other on the part of the beasts is high right now. Though Hector’s arrival may have been disruptive, it is the best integration we’ve had, and everyone seems benefitting from it. He still chases Neville, the poor fellow, but his attempts either to intimidate or play with the others have met with chilly and, at times, rather sour receptions. That’s not entirely a bad thing, as most of the cats are tending to ‘live and let live’ right now.

In fact, there is less concern with proximity these days. Portia spent some time purring on my lap during the movie Saturday night, and Renn, though he was feeling poorly at the time, came into the library to keep me company, too, as he usually does. He seemed untroubled by Po’s presence and settled on the heated towel near by. Portia considered leaving but stayed for about twenty minutes more. Then on Sunday, while my round girl was again on my lap, Hector came in and lie down without concern on the heated towel.

There is still plenty to keep one occupied and exasperated in the Cosy Apartment, but there is also much to make one content. 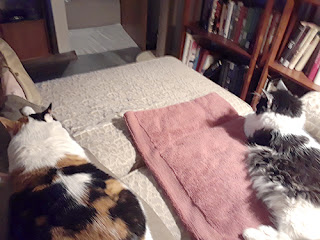