I have spoken with Portia’s new human and have learned that my former foster-cat is settling very well in her new environment. Po appears to enjoy having her person to herself, but also having a whole house to herself. She has explored it and found a number of favoured spots already. This made me think about how - and when - fostering a cat works.

There have been a number of cats I have fostered and chosen to adopt. Tucker and Renn were the first; The former I felt was too sensitive a cat upon him to inflict a change of home. Renn, I can’t really remember why I decided to keep him. Cammie took so long to adjust to a new world that it seemed counter-productive to hand her over to others, especially after her abortive adoption in the summer of 2014. Her later allergies, severe enough sometimes to warrant emergency hospital visits, confirmed the correctness of my decision.

Why I chose to adopt a foster cat rarely is a mystery. Why I chose to let others go when adoption by others presented itself requires more thinking.

Sometimes, as in the case of my first foster-cat, Lincoln, the cat is with me too short a time to form an attachment. In other cases, there is too much abrasion in their relationships with my own beasts. But what of a cat such as Portia? She did not fight with the resident cats, though she clearly would have preferred them to be absent; she was relatively easy-going, at least once I got to know her habits, and she had carved a little niche for herself in my home and routines. So why did I let her go, when I had the option of adopting her?

What it comes down to is the good of the cat. Po was content in the Cosy Apartment; I am sure of that. But she was not happy. She had access to the whole apartment, but rarely ventured into the bedroom, where the other cats were often found. She did not spend much time in the sitting room or on its cat-trees until forced by the temporary closure of her ‘safe room’ - the library - by Hector’s arrival and seclusion there. She was, to tell the truth, inhibited here.

I gave her all the time I could, which was not a great deal, really. The others each had their special times with me; these moments evolved over the years and were nearly incidental to what else I was doing. Po’s time I had almost to schedule. I know I didn’t give her as much attention as she would have liked. Portia wanted to sleep on the bed with me but, the few times she seemed to try, was disgusted by the fact that boy-cats were already there, and left again.

Portly Po was gaining weight; there was little I could do to battle that in a multi-cat household. Physically, her time with me bordered on the unhealthy.

When S inquired after Portia, I was the one who initially conversed with her. I knew immediately that not only was this an excellent chance for Po, but possibly the best one she would have. I could have chosen then to adopt Portia. I had rather more than half a mind to do so. I liked Portia very much; she would have lived the rest of her life comfortably and contentedly - but would she have been happy?

A longer talk with S by the PAW Society’s member responsible for adoptions confirmed my belief that S was, ‘on paper’, perfect for Po. After that, confirmation came upon her introduction to S. Now, I know I made the right decision. As an only-cat, she would be happy. As the sole recipient of her person’s attention, she would be happy. With a whole house to explore and live in, free of feline siblings, she would be happy. And having no other animals’ food to worry about, S can turn her mind to Portia’s weight: in addition to food moderation, there is exercise; Portia has been going up and down stairs, finding a snug spot in a basement bedroom, but living principally upstairs, and she has to exert herself, just a little, to get up on the bed. She would be healthy.

This then is the reason for fostering. It’s not just to keep an animal safe and satisfied, but to keep her safe and satisfied until she can be healthy and happy. If she can achieve that in her foster-home, then adopting a foster-cat may be considered. If she will be better off, healthier and happier, elsewhere - as good as things may be in her foster-home - then she should be released to a new life. There are, of course, many variables that can influence a situation, but, in general, these are the rules that apply.

It’s not easy letting go of a foster-cat. There is often an amount of ego involved: one asks oneself, ‘Who can care for this cat better than I?’ But if the answer to that question is, honestly, ‘This new person can,’ then the fostership must end. Like that horrible moment at the end of a cat’s life when her human wants to keep her alive, despite the fact that she would be better released, the human must demand of himself, ‘What is best for the cat?’

Portia has started her new life. I have no doubt that she will be closer to S than she has been to anyone else since her birth. She will be treated very well, and she will be happy. That, I believe, is how - and when - fostering works. 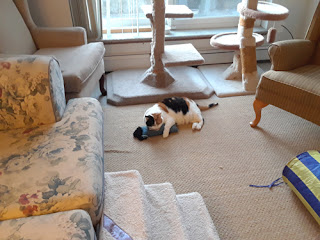