Life without Tucker will be different, but it goes on. I will be thanking each person who was kind enough to leave words on Tucker’s passing; some will be thanked via comments on their blogs, others through replies to comments they have left me. It will take some time, but I hope not to miss anyone.

In the meantime, the Cosy Apartment is growing accustomed to Hector, and he is growing more accustomed to roommates and routine. He is less ravenous when it comes to food, no longer thinking, or, perhaps, hoping, that each bowl or each movement toward putting something on the floor means food for him. He is splashing water from the water-bowls less. This is the result of a combination of advice from readers and Hec simply changing his drinking habits, maybe seeing that what was necessary outside is not inside.

Most importantly, he is less of a bother to his foster-siblings. Hector still chases Neville at times, and now and then pounces on Renn, but it’s nothing like it was. On the weekend, I watched my big boy - who is now less daunted by the newcomer’s presence - walk past Hector. The latter waited a moment, then ran up to Renn and slapped him almost gently on the bum. Renn gave a jump, but that was it. This is a more typical incident now than the earlier assaults. Neither Neville nor Renn are concerned at Hector’s proximity when all want a snooze. 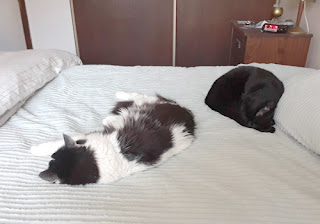 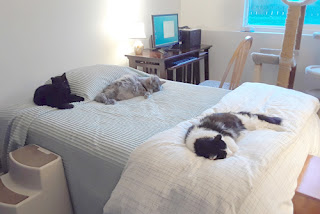 And, for the first time, Hector, of his own volition, climbed onto my lap. I have been placing him there from time to time, an action with which he has no objection, but this is the first instance of him placing himself there. He even fell asleep for several minutes.

However bad life can be - and the death of a friend is very bad indeed - there are moments to celebrate. We celebrated a little in the Cosy Apartment this weekend. 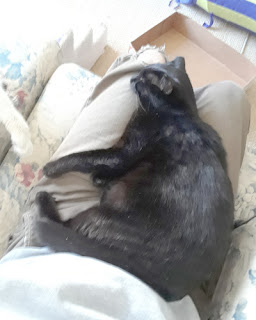 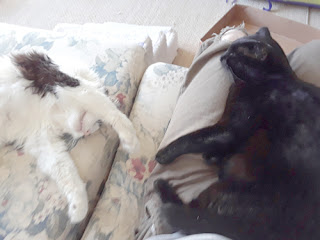