Dr Bellen thanked the station-master and returned to the bench where he had been waiting with Tucker R Poly. The two had not been sitting long, and they had enjoyed the snug atmosphere of the station, with a pleasant fire in its grate, and the smell of fir from the evergreen boughs that decorated the waiting room for Christmas. 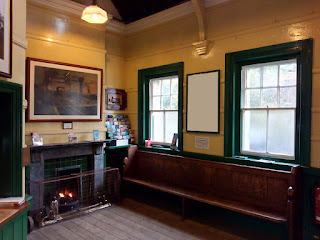 “The train will be a few minutes late,” he said.

Trains were rarely on time in Idylland. Trains that run on time may have seemed too much like a boast of the wrong kind of regime, so it was not inconceivable that trains were encouraged to be a little behind or ahead of their times. The fact that they were never more than ten minutes late seemed to confirm this.

“Are you comfortable?” Dr Bellen asked. “Do you need anything?”

Tucker shook his head. He looked tired, but he told Dr Bellen that he was quite comfortable, and thanked him. Nonetheless, he leaned a little against the doctor, when the latter resumed his seat on the bench.

“I had fun,” the cat commented, a moment later. 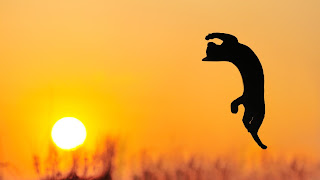 Dr Bellen regarded Tucker. The cat was not what he once was. He had shrunk considerably, so it seemed to the human. Certainly pounds had been lost, and the once chubby-cheeked face was sunken and thin. Despite all the medicine, despite all the best doctors that the Cosy Apartment Feline Sanitarium could bring to bear on the problem, Tucker had to leave Idylland. He held his ticket on the 8.30 to Samarra in his paw. 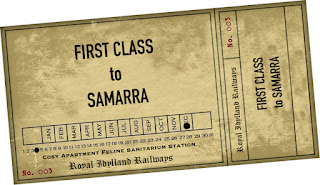 “You’ve been through a great deal,” Dr Bellen pointed out.

“I haf no mancat bits, eyether…” 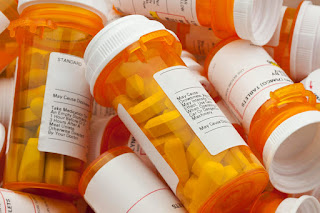 Dr Bellen didn’t say anything right away, but then asked, “And you still had fun?”

Tucker looked quite serious for a moment. Outside the station, snow was falling. It was cold – though it never gets very cold in Idylland - and there was a cheery glow from the fireplace. 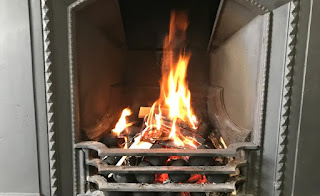 “It’s like what you told Mr Parker when he had to go to Samarra, a few years ago.”

“Mr Parker! Doo yoo think eyell see him wen I get to Samarra?” 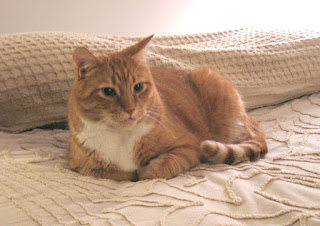 “Yes, you will. And Tungsten, and Josie, Cammie and Raleigh, and Bear-Bear, too. All the wonderful people and animals who have gone on ahead.”

“Doo yoo ‘member wen Mr Parker and me got into a fite? Hahahahaha!” Tucker swung his legs, as they hung over the edge of the bench. He was too short to reach the floor from where he sat. For a moment, he looked young again.

“I do,” answered Dr Bellen, smiling. “There was even blood! Do you recall when you wore that device for measuring your blood-sugar?” 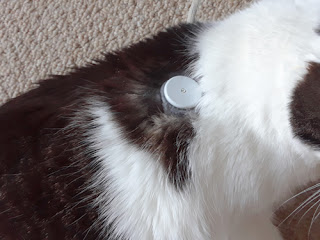 “You were a pioneer. The doctors thanked you for your help. And what about when you had to stay over-night in the infirmary?”

“That wuz after thay took my second bit of mancat bits,” Tucker appeared momentarily annoyed, but then brightened. “Thay gayv me something that mayd me loopy. I tride to nip yoo wen you visited me. Hahahahaha!”

Dr Bellen and Tucker talked about the past eleven years; all the memories they shared came out in funny stories and jokes. The doctor reminded the cat about the innumerable dinners they shared, and the conversations they had while waiting for the food to arrive. 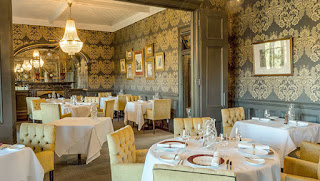 Tucker laughed at how he had once been frightened about leaving his residence at the sanitarium, and how it scared him to walk close to the laundry rooms. 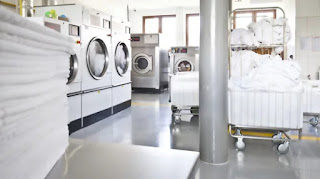 “Yoo see, Doctir? Yoo haf to haf fun, and yoo haf to ‘member that there is mor fun than sadniss.” 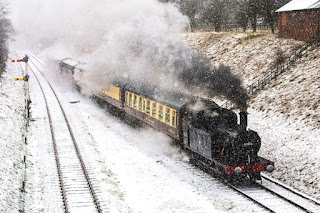 A train blew its whistle, and the pair in the waiting room heard the 8.30’s locomotive puffing its approach outside. The station-master exited his office and checked his pocket-watch against the clock on the wall. 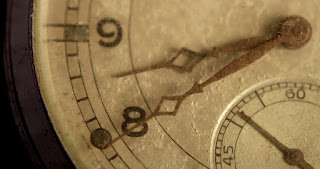 “Only ten minutes late,” he said, nodding with satisfaction. He turned to the sole passenger for the train. “Would you like some help with your luggage, Mr Poly?”

“No, thank yoo,” replied Tucker. “I dont haf much.” After the station-master returned to the office, the cat glanced sidelong at Dr Bellen and said, quietly, “He cawld me Mr Poly.”

“Would you prefer that? I’ve always called you Tucker. If I’d known---”

But the cat shook his small head, saying, “No, I lyk it wen yoo cawl me Tucker. But now and then wen sumwun sez Mr Poly, its nyce, cuz it shows respect and kurtisy. It shows eyem not awlwayz the baby of the famlee.”

“I understand,” Dr Bellen said. Then, indicating the doors at the other side of the waiting room, inquired, “Do you want anything from the restaurant to take with you?” 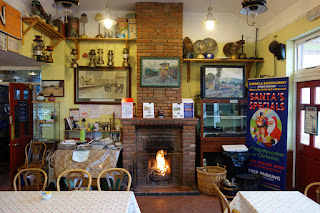 Dr Bellen helped his friend down from the bench.

“Soon, you will feel like eating again, even before you reach Samarra. In fact, everything will feel better soon.”

Tucker perked up as he said, “I noe! I woent haf kanser.”

“And my die-yabiteez will be gone.”

“I will haf awl my mancat bits, too…”

“I will haf TEEF! Hahahahahaha!” 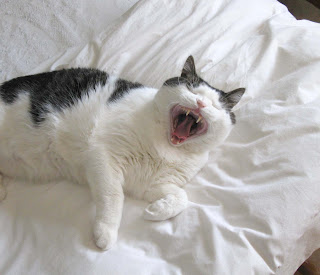 A small crowd had collected on the platform outside the station, dressed warm against the chill air. The train huffed, waiting; a guard, with a kind smile, held the door open to an empty compartment, the seats inside thickly padded, and the air warm. 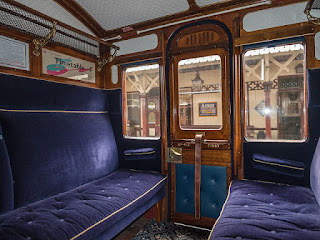 Tucker was touched. He had not known that he was so well-liked and respected.

“All you’ve gone through, and how much you kept purring through it all, have brought you many friends,” explained Dr Bellen. He lifted the cat into the compartment and closed the door. Tucker immediately lowered the window and leaned out. He rubbed his furry face against the human’s hand.

“I will miss you, Doctir,” he murmured. “Merry Christmas.”

“I will miss you, too,” responded Dr Bellen, though he did not feel that Christmas would be merry this year.

The train started to move forward. The people and animals on the platform waved and smiled and wished Tucker ‘bon voyage’. Tucker leaned a little farther out the window.

Dr Bellen stood on the platform long after the crowd of Tucker’s friends had dispersed. The doctor felt that he had spent a lot of time on train platforms lately. He was still there as twilight crept in its slow and friendly manner from the east. Even in Idylland, winter evenings came early. The lamps of the station came on, and those along the railway, and the lane leading back to the sanitarium. Dr Bellen pulled his coat closer about him, and tugged on the brim of his hat. He at last turned, and set his face for home. 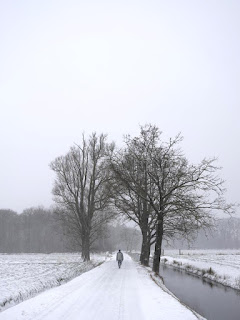 There was still work to do, waiting for him in his office. One of the attendants had kindly lit a fire in the grate, and the flames’ light was reflected on the smooth stones of the hearth. 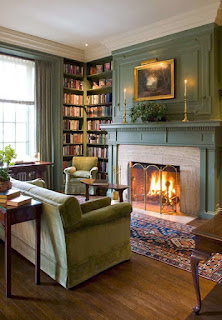 Dr Bellen walked to his desk but did not yet turn on its lamp. Instead, he lifted one of the framed photographs that stood on a corner. He carried it to the wall next the fireplace and carefully hung it under the others that were there. It was a picture of Tucker, looking very much like the ‘baby of the famlee’. Dr Bellen smiled. 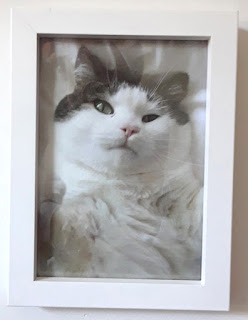