Portia: A Home for Christmas

In the time since Portia went on a trial-adoption almost three weeks ago, I have received two updates on her situation, but I did not want to publish any news about her until there was certainty. Yesterday, I was told that her adoption has been finalised. Portia has found her home.

Po had little trouble adjusting to her new surroundings when she arrived. She lies on her new person’s lap and sleeps on the bed with her at night; this latter information made me especially pleased. The portly girlcat seems to have put her anxiety into her first change - coming to my place - leaving her free of much concern and worry in her second big move. I like to think that she was able to see in the Cosy Apartment that different humans could be quite nice, after all.

It helps tremendously, I think, that Portia is an only-cat. She must have realised that quite swiftly when she arrived in her permanent home. The lady who is her family now has had cats, but the most recent one died some time ago; any scent of other animals would have greeted Portia as stale; she would have known that she had the place to herself - and her human to herself, too. Being able to demand attention whenever she wants it will be a great treat to her.

I will be interviewing the lady in question soon for the December issue of the PAW Society’s newsletter, so I will learn more about Po’s new world, but I wanted to present this glad news to all those abroad who know of Portia, and who had wished her well in her new adventure. She has a home for Christmas - and ever after. 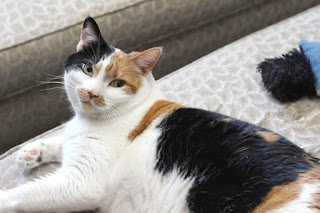