The Last of the First Four

You may notice two new memorial badges added to the collection on my side-bar. These are in honour of my late friend, Tucker. The upper of the two was made by Ann, of Zoolatry. Her offer of this lovely memorial was very kind, and I was grateful that she took the time to make such an attractive image. The lower is from Ingrid, of Meezer’s Mews & Terrieristical Woofs. This beautiful badge was a generous thing to make for me and Tucker. I am thankful that there are such considerate people on the internet.

Inevitably, these commemorations of Tucker’s life and passing emphasize the fact that of my First Four, there is just one remaining. At the end of September, 2020, I wrote about my Old Guard. There were then three. Thirteen months later, in the last days of October this year, there were two. Now, one stands alone.

Renn, too, is aging, and, though he is but fourteen, he is starting to feel his years, I know. He has not been to the veterinary hospital as much as Tucker, but he has had his issues. Nonetheless, lean and strong, he remains constant, happily waiting with me while the tub fills for bath-time on Saturday nights, and joining me afterward for a movie. He almost always sleeps on the bed with me, and asks for chest-rubs following dinner as we relax on the sitting room couch.

My big boy carries with him memories of Tungsten and Josie and Tucker, and all the cats who came between. He is the old veteran who has seen it all and thinks nothing is remarkable enough to comment upon. He and I share a long past.

I hope he and I will share as long a future. 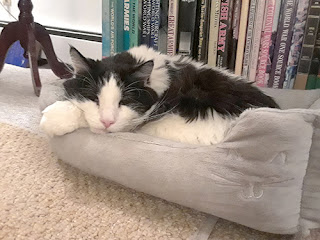