Firstly, I want to thank everyone for the concern over Renn. He has been fine since his episode, and is eating as well as Renn eats. I think we can expect such alarms from time to time, perhaps increasing as he ages. But we will see them through in each instance.

On the oblique subject of food, let me introduce the Lurker. You may know him better as Hector Fortescue. In his never ending quest for more food, the Lurker has discovered that Minuet, the very old lady who lives in the library, is not only fed separately from the other cats, but more often, though in smaller amounts. Of interest to the Lurker is Madame’s small amount of soft-food, received in her special dish and served in bed. This is not only for her comfort but for the food’s security, the Lurker being frightened of Minuet’s fearsome cries. Therefore, he waits patiently until Min leaves to explore, or to drink from one of the distant water-bowls she favours. Then down he swoops, and within seconds, any remnant of food Minuet may have left for later will be gone.

Precautions are being taken against such raids – picking up the bowl when Minuet is finished with it, chasing the Lurker from his hiding spots – but he has cunning, agility and perseverance on his side.

Fortunately, the amounts he manages to seize as prizes are never much. And besides, the accomplishment seems to make him feel good. Even Lurkers need encouragement now and then. 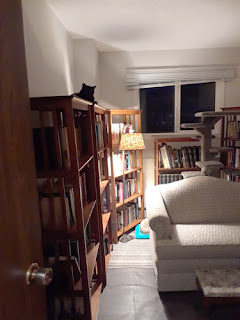