The Cats at Dawn

I rise early to go to work. It’s a necessity, not a wish. I do wake even on my days off earlier than I did when young, but getting up at 5.30 on weekday mornings is not something that I like doing. The cats wake with me, of course, and most of them seem much more eager to begin their day than I am.

Most look forward to their soft-food breakfast. They each have their spots - Tucker in the kitchen, Cammie on the first step to the basement, Josie in the sitting room; Renn rarely eats breakfast, and my foster-cat, Noah, eats in the parlour, with the door closed, to keep him from distracting, and being distracted by, the others. 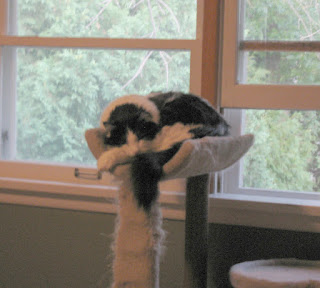 But after breakfast, and a trip to the litter-box for one or two of them, they settle down for a nap. After all, they had to wake far too early for breakfast. Though it’s only the beginning of August, I’ve noticed that the day is not so light when I wake as it was. Similarly, when I write at the dining table in the evenings, I sometimes need to turn on the electric light. The summer, though still hot and strong during the middle of the day, is starting to show its age at its edges. There are, however, so the cats think, still some hours at this time for snoozing before they get on with the serious sleeping of the day. 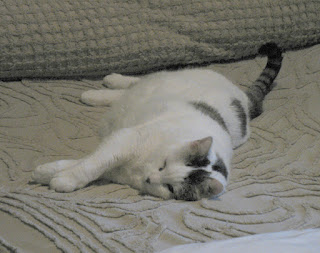 Noah is active, even at this hour, as befits his childish energy. I provide him with a Trac-ball toy and some diversions in the way of fuzzy mice, but I suspect that he spends his day at the window, watching the world. 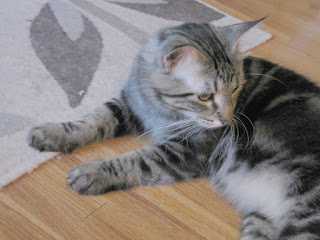 The perma-cats find their places before I go to work. Cammie is usually on a cushioned chair, if Renn is on the cat-tree by the bedroom window. If the princess can seize that high ground, my big boy rolls over on the siting room armchair. Josie is often on the bed, while Tucker wanders; he has a bite of hard-food, plays with a toy and watches me go. 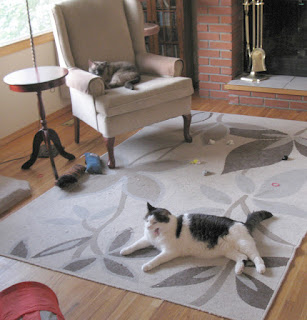 I imagine that they all spend the morning and afternoon asleep, periodically waking to eat or attend to other bodily functions. Their day is quiet and boring. They may play, observe the wide world, investigate the house, or bother each other. I envy them.
Posted by John Bellen at 6:07 AM