A Brush with Eccentricity

I like brushing the cats. Most of them enjoy it, and it leaves them feeling smooth and clean, ridding their coats of the loose hairs that cover them as they shed, which they do every second of every day. They look great afterward, for a minute or two. I think they feel good, as well. But each of my four react to brushing in different ways.

My Tungsten used to purr during a brushing session, but was always on the move, as if trying to get away from it. I had to be gentle with her, as it was always as though I were trying to brush a furry bag of bones, she was so thin.

Cammie detests being brushed, though a little less than formerly. I thought it may have been the smell of other cats on the brush, but she has her own, and still reacts the same. I can usually manage a few strokes before the princess begins hissing and growling. Her permission lasts too short a time to obtain a photograph of it.

Josie takes after Tungsten to a certain extent. She will initially lie down, purring, ready for some attention but then, when I start brushing, my Chubs stands and attempts to leave, only to collapse a few feet away, expecting to be brushed some more. This can go on for some time. 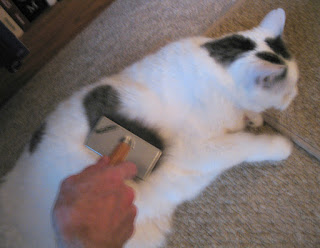 The boys love their brushing. Tucker will throw himself on the floor in anticipation, and start purring before the tines of the brush touch him. He enjoys a firm hand and his fur shimmers afterward. When I am done, he will squeak for more. The strange thing is that the roly poly one vigorously licks one of his forelegs the whole time that I am brushing. He sometimes even nibbles it. I make sure that he does no damage - the brushing doesn’t go on for so long as that - but I find it odd. It may be an uncontrollable reaction, like the kicking of a rear leg when a certain part of the tummy is rubbed. 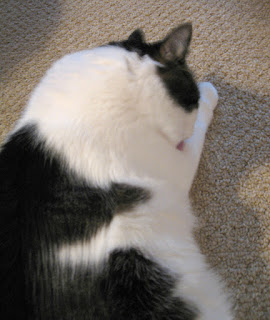 And Renn needs to sniff the brush. My big boy is a prodigious smeller, with that large nose of his, but he feels compelled continually to smell the brush as it is being used. As may be imagined, this causes some inconvenience, as I cannot brush him properly without risking a punch to his proboscis. Yet he loves being brushed. He especially enjoys a rough grooming of his chest. That is when he at last stops trying to sniff, and relaxes. But he gives his throaty purr wherever the the brush strikes him. 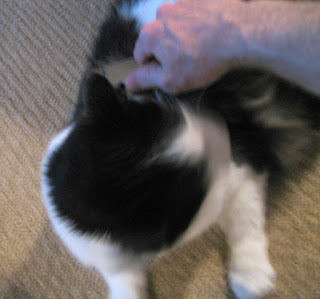 Even when being groomed, my lot are an entertaining bunch. Strange and eccentric, they are individual in every way. They are, after all, cats.
Posted by John Bellen at 10:28 AM