I am suffering through a minor pestilence. My apartment has ants. Living on the ground floor of a building, and in an apartment that is half-subterranean, I expect the odd ant, and since I moved in, I have found a few such trespassers. That bothers me little. But it is colonising season, that exciting time in a young ant’s life when he or she takes wing (literally) and flies off to strange and wondrous lands to start a new community. This annoys me somewhat more, as an older colony is apparently just outside one of my external walls and is using a very small portion of my home as a staging area.

The affected spot is indeed small, against a wall and behind a bookcase. But from there, the flying ants try to exit through my screen door to the outside world. They do not have Cammie’s experience of screens and thus cannot simply force their way through. Consequently, I have been vacuuming the unfortunate emigrants up as they appear. 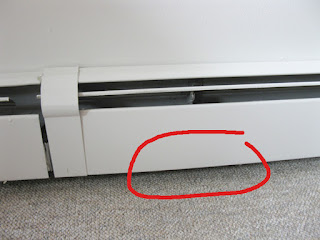 This is not a satisfactory solution, and I have purchased ant-traps. These work along the lines of providing tasty but poisonous food for the insects that the unsuspecting workers carry home for the whole colony to enjoy in a heady bacchanal that becomes their last meal. That is the theory. Not having used this variety before, I was surprised and amused to read this printed warning on the hockey puck shaped tin: “Warning: contains the allergen peanut butter.” The device must contain some deadly insecticide as well and yet the warning is of the a spread found in every grocery store. I wonder if I can get ant-traps containing jam or mayonnaise… I assume that the manufacturer is not counting on the ants being allergic to this confection, but instead uses it as a lure, along the lines of the ants’ rural cousins being attracted to treats at a picnic. 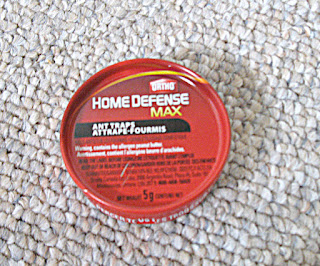 Then again, considering the effect of the traps, the peanut butter may be the sole ingredient meant to destroy the insects, because the traps are dealing no kind of death among the intruders. The ants seem to come and go; I really only see them during the heady moments when a new wave of explorers is ready to be sent off. But at those times, they appear quite immune to the poison in the ant-traps. They aren’t even made the least bit woozy by the peanut butter.

I am sure the ants’ activity will subside in a couple of weeks, once all the young ’uns are despatched to their brave new worlds. Even so, I was hoping to rid myself of their old world in the meantime. If anyone reading this knows of an effective means of destroying ants, preferably by the colony rather than individually, without endangering cats - or humans - I would appreciate any information.

In the meantime, I will leave you with a picture of Renn, immediately after I explained to him that we have ants. His bravery carries him only so far. 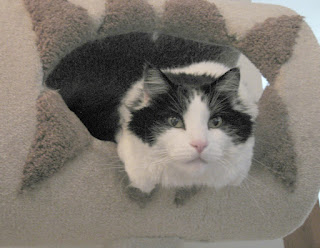