I was going to limit this article simply to showing how Renn, like Tucker, is another heavy cat who enjoys his lap-time. Unlike the roly poly, my big boy (two pounds heavier than Tucker), likes to sit or lie more or less facing me. This allows him to knead my stomach whenever he wants. In the house, he used to knead my kidneys; now, it’s my stomach. 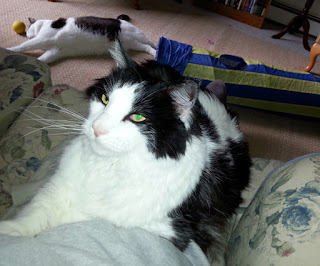 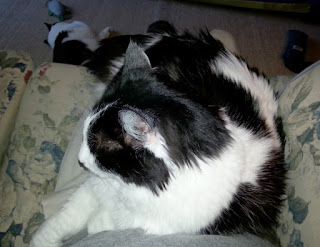 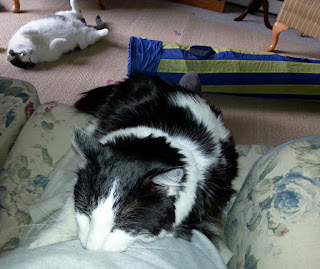 But last night, Renn threw up. He almost never vomits food but did so twice, once about 10.30 and then again four hours later, this time mainly liquid. He sometimes throws up a hairball, but I can’t remember the last time he was sick. He did not lie on the bed last night as usual, and was not in the hall this morning, waiting for his soft-food breakfast. He wasn't interested in food, and lie on the couch in the library.

It may be a passing thing. I fed Renn some Fancy Feast ‘seafood feast’, which I don’t give to the girls, because I think it causes Cammie’s ‘head-rash’ and may make Josie throw up (though in her case, it is almost immediately afterward). The boys have always enjoyed it and not suffered for it. Perhaps that has changed. I won’t be giving my big boy that variety again, just to be sure. Hopefully, he will be feeling better when I return home tonight. 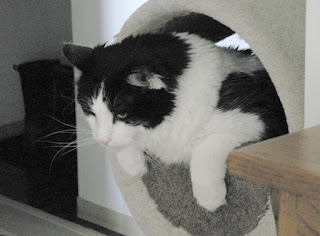