Josie is much more demonstrative in her affection than she used to be, but today, she was very needy. I had only to come into the room in which she was lying for her to waddle over to me, purring, and flop down in front of me for some attention.

The morning and early afternoon I spent in accomplishing chores, including cleaning the kitchen, but after all the work was done, in the mid-afternoon, I was able to give my Chubs some time. I lie on the bed next to her and rubbed her chin, her favourite form of attention, for about twenty minutes straight. At some point, Cammie came in and, seeing me lying down, figured my chest was free, so she settled there for a while, despite her proximity to Josie. Petting two cats simultaneously is rather like that old trick of patting the head while rubbing the stomach, but a human with more than one cat masters some surprising – if narrowly valuable – actions.

Eventually, the princess left and Josie seemed to fall asleep. After I left, she actually was calling out to me, so I came back and gave her an epilogue of attention. Then, she seemed sated.

I don’t always give in to the beasts when they demand my time; to do so would require more hours in the day, never mind just those I had free. But at the back of my mind is the knowledge that some day, these roommates of mine will no longer be with me, and though I will have anyway regrets over doing or not doing various things for them, I don’t want to remember any of them and think that I should have taken these few minutes or that quarter-hour to spend with them. It’s why whenever one rubs up against my leg, I acknowledge it. One day, it will be the last time it is done.

So, I like to indulge the cats when I can. Fortunately, they are not always so demanding as Josie was today. This evening, she seems happy to have me pet her when I see her, rather than having me always with her. I seem to be on call, rather than in attendance – at least until the next time Little Miss Needy summons me. 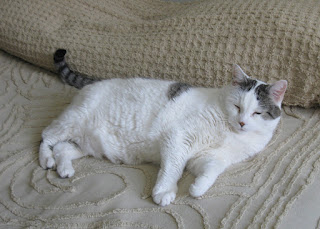