Tucker continues to claim most of my attention with his latest physical ailment. I don’t think this one is serious, though it is puzzling, and therefore something to watch closely.

A few days ago, the roly poly one developed a small but vivid redness on one side of his nose, like a small scratch. That is, in fact, what I believed it was. It would not have been the first time he had annoyed another cat enough to have received such punishment. But the next day, the ‘scratch’ had grown, and last night I noted that it covered even more area. 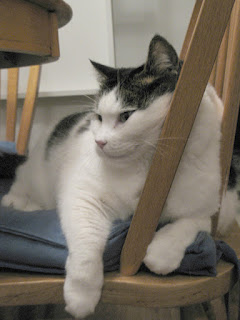 This morning, it is no larger, but it is still present. It resembles a random pattern of blotches, very small and on the right side of the front of Tucker’s nose. I have applied Vaseline to it twice, as it looked a little dry, as well as red. I did this before when his nose suffered a bit of a crack during his time with a cold. Then, he did not mind me putting some ointment on his nose; this time, he reacted differently, and I wonder if the skin there is tender or otherwise sensitive. 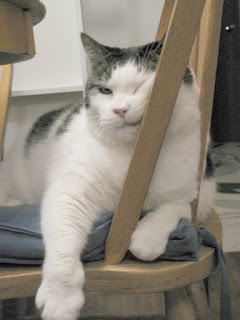 Since the ruddiness has spread since I first observed it, I have ruled out a scratch. It may be an infection of some sort, or an allergic reaction. Tucker has not eaten or drunk anything unusual recently, so I suspect it is not an allergy. He remains the same in all other aspects: he is happy and cheerful, plays and retains a good appetite. 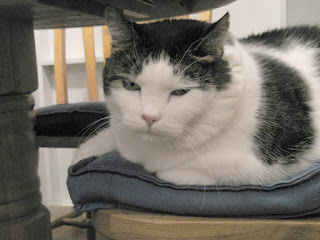 The pictures were my attempt to photograph the redness on his nose. Readers may want to enlarge the images by clicking on them. When happy, Tucker likes to rub his face on the spindles of the chair’s back, purring all the while. These were the best I could achieve, and what anyone sees of the nose and its mystery is, I'm afraid, minimal.

I will keep an eye on the nose, and if it changes any further for the worse, I may have to take the roly poly one to the veterinary hospital, something which we both want to avoid. The problem may be a passing thing; Tucker has had enough physical troubles, and I would like to see this one simply fade away. We will remain vigilant. 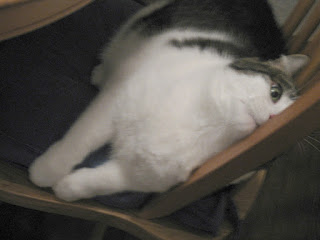