Knowing Me, Knowing You, Uh-huh

Firstly, I want to thank readers for the suggestions they made regarding my ant problem. I have already implemented a couple of the solutions. It may be difficult to determine if they are working, as the ants were never present every day, and may invade only for the release of the colonists, and then retreat again. But whatever keeps the invaders out of my home is a success.

Today’s musings are related to yesterday’s, regarding communication between man and cat. Angel Abbygrace, in her response, observed that cats and their owners may develop their own language, a means of communicating that only the two of them comprehend. I can believe that. The point corresponds to what I had already been thinking about, after an incident on the weekend. 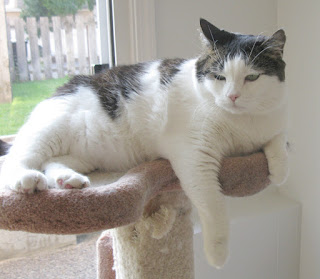 Tucker likes to sit at the dining table with me while I write. He snoozes and I scribble away. He also likes to sit there while I eat a meal, but that may have to do with another set of factors. Anyway, recently, he was lying on a cushioned chair, gathering some rest, when he dropped to the floor. I immediately realised something was amiss. 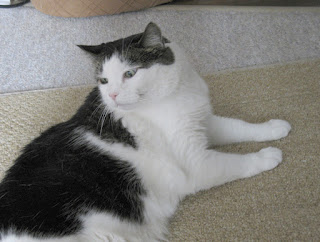 How did I know? It may have been that he remained where he landed for a few seconds, though I was aware of something wrong right away. I also suspected that it was not serious. I watched as the roly poly one trundled into the sitting room. The way he hunched himself was a second clue. I guessed what was coming.

I stood behind Tucker and, as I anticipated, he started to heave. I was able to get him off the rugs and onto linoleum before he vomited. It was not a serious episode, just the usual product of a sensitive stomach. Tucker sometimes does this after eating - though he doesn’t do it often, thank goodness - but once in a while it occurs for no discernible reason. Less than a minute later, the sausage-shaped cat was back on his chair, ready to resume his interrupted snooze. 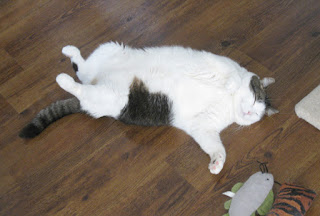 We come to know our pets so well that even a small behaviour, if it is abnormal, can register with us, and alert us to something that is different. The action need not be a bad one: Josie will slap her rat-tail in the manner of a cat who is annoyed - others have pointed out when they thought she was angry - and yet this does not mean the same in my Chubs as in other felines. She will flick her tail while she is purring and clearly enjoying a chin-rub.

It’s all part of living with something vital to your life, the way a farmer can read a sky for weather, or a general a battlefield. Cat-fanciers’ expertise is in knowing their own cats. And I am certain my own cats know me in a similar fashion. It is intimate knowledge, that which comes with constant interaction, attention, careful consideration…and maybe a little affection. It is part of living with friends. 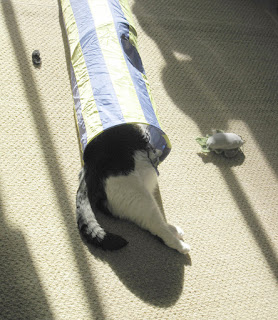