His Sense of Playfulness

The comic actor Martin Short identified a necessary characteristic of the ‘buddy movie’ genre. He said that at one point in the film, the two leads (constituting the ‘buddies’ of the genre) have to be in a moving automobile, look through the windshield and simultaneously scream in terror at what is hurtling toward them.

I am reminded of this to an extent when I interact with Tucker. He has a playful quality about him that reinforces the impression that he is a big, albeit furry, baby. He will be sitting or lying about and I will approach him with the clear intent of seizing his head, or grabbing his face or ears, or some such thing. He knows it is in fun and will squeal like a film character being attacked in a horrible but amusing manner. Think of Bill Murray being slimed in Ghostbusters.

If it is true that cats vocalise only to humans, as has been discussed on this blog recently - and this is an assertion which I don’t doubt - then Tucker can be screaming only for my benefit (and maybe his own) and must be pretending. He knows that he is not about to be hurt (he is purring all the while), yet reacts as if he is going to be dealt a mortal blow. It’s part of our game.

How this game developed I can’t say. Other cats may play similarly, but squealing in fake fear is not something I’ve heard about in other animals. Why Tucker does it can only be due to a sense of playfulness, to a quality special to his roly poly personality. It may change, it may disappear, but for now, he and I are enjoying ourselves. 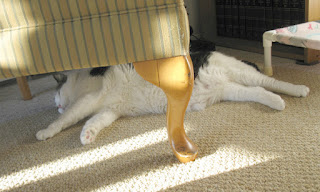