Walk a Mile in Them, Renn

I came across Renn trying on my shoes during the weekend. It’s not a habit of his, but it reminded me that I had seen him do something similar six years ago, when he had first come to stay with me. I have no idea why he lie on my footwear in 2010; I have no idea why he was doing it now; I have no idea why he hasn’t done it much in the interval. But the pair of photographs make for good then-and-now pictures. He hasn't changed much to look at, has he? 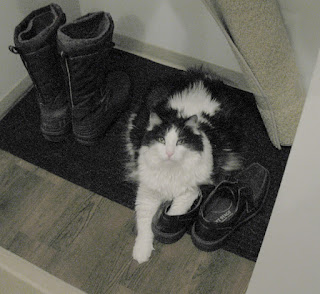