My cats aren’t very playful. They do play; I play with them, and they play by themselves, now and then. Rarely, they play with each other. But they don’t play often or for long.

I try to interest them in different things. I change the toys that I use. I provide toys with which the beasts may amuse themselves. They use them: Cammie will carry about the yellow and white mouse and deposit it near her cat-tree in the bedroom. Tucker enjoys knocking the plastic rings from milk jugs about; there are usually half a dozen under the microwave oven stand at any given time. But by and large, the animals are a passive lot.

I alternate the entertainments available and produce new ones; these changes create some excitement, sometimes, for a while. My latest attempt has been a toy called The Busy Bee. It is a simulated bee on a narrow plastic wand, suspended from a clamp that can be fixed to a door handle or furniture leg. I could not find the Cat Dancer in my town and so thought I would try this substitute. 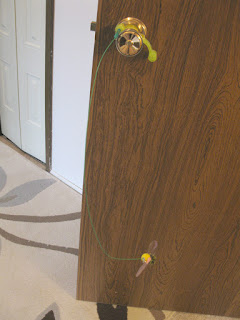 After the initial and predictable period of all the cats looking at the new device for varying amounts of time (I think Cammie hissed at it once), they largely ignored it. Renn did play with it intermittently the afternoon I brought it home. My big boy can be most energetic when he wants to be, and he jumped and grabbed and chewed at The Busy Bee, briefly. Since then, the new addition has been unused. I think I’ve walked into it ten times more often than any of the cats contemplated playing with it. 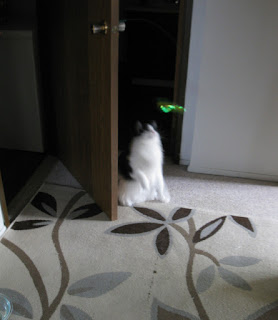 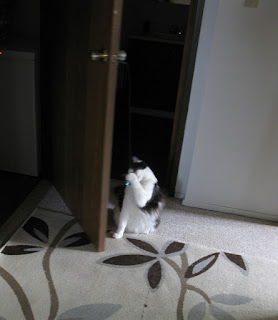 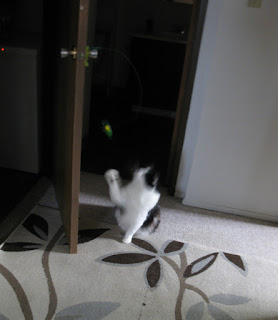 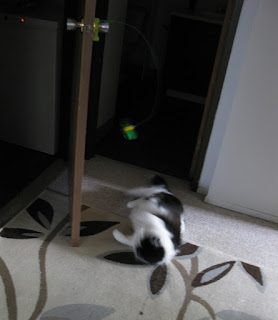 And so it will probably join the other toys and would-be attractions worth which I attempt to stimulate the energy of my lethargic pets. It, as are the others, are brought out at different times, and are joined by new purchases, but I feel rather like the parent who buys a room-full of toys and gadgets for his children, only to hear them complain of their boredom. The Busy Bee will go into storage for now, to be dusted off in a couple of weeks or a month and shown to the reluctant recipients again. Given the frequency and directions by which my beasts change their minds, the toy may experience a busy day yet.
Posted by John Bellen at 10:23 AM